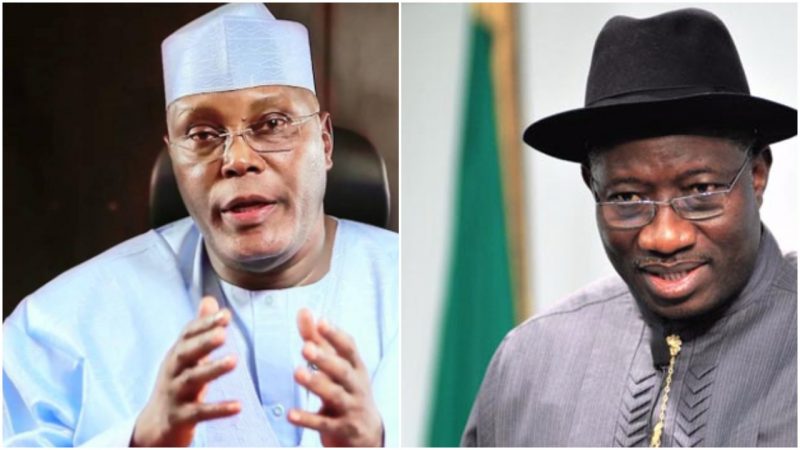 Former President, Dr. Goodluck Jonathan has felicitated with former Vice President and Presidential Candidate of the Peoples Democratic Party (PDP), Alhaji Atiku Abubakar, on the occasion of his 76th birthday.

In a goodwill message to the former Vice President, Jonathan described him as a man who has made notable contributions to the growth and development of the country.

The former President also wished him a long life in good health.

He stated further: “I join your family and other associates to celebrate you on the occasion of your 76 birthday.
“As a politician and businessman, you have made notable contributions to the growth and development of Nigeria for which you have remained relevant to your nation, several years after serving as Vice President.

“I pray God to grant you good health, peace and a long life as you celebrate. On behalf of my family, I wish you a happy birthday.”

Born on 25 November, 1946, Atiku is a Nigerian politician and businessman who served as the vice president of Nigeria from 1999 to 2007 during the presidency of Olusegun Obasanjo.

He ran as governor of Adamawa State in 1990, 1997 and later, in 1998, being elected before becoming Olusegun Obasanjo’s running mate during the 1999 presidential election and re-elected in 2003.

He was a presidential candidate of the Action Congress in the 2007 presidential election coming in third to Umaru Yar’Adua of the PDP and Muhammadu Buhari of the ANPP.

He contested the presidential primaries of the People’s Democratic Party during the 2011 presidential election losing out to incumbent President Goodluck Jonathan.

In 2014, he joined the All Progressives Congress ahead of the 2015 presidential election and contested the presidential primaries losing to Muhammadu Buhari.

In 2017, he returned to the Peoples Democratic Party and was the party presidential candidate during the 2019 presidential election, again losing to incumbent President Muhammadu Buhari.