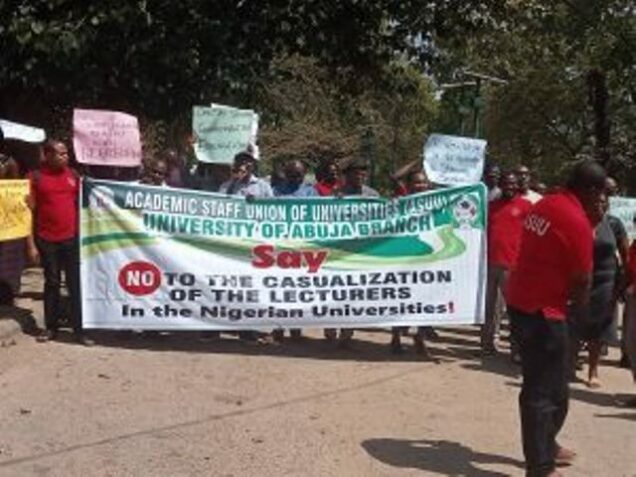 The Academic Staff Union Of Universities (ASUU), University of Abuja branch, on Friday staged a peaceful protest at the institution’s Mini Campus over withheld salaries.

The News Agency of Nigeria (NAN) reports that the union members staged the protest following the ‘No Work No Pay’ policy and court order that mandated the lecturers back to classes.

The ASUU branch Chairman, Dr Kassim Umaru, during the protest said that decision reached immediately after its congress called on well meaning Nigerians to urge the Federal Government to honour the union’s demands.

Umaru said that university lecturers were not casual staffers and could not be paid half salary, adding that the National Executive Council (NEC) of ASUU would decide on an action if the government failed to address the issues.

He called on the Speaker of the House of Representatives, Mr Femi Gbajabiamila, to honour agreement reached with the union, adding that the union was forced to the classroom through a court injunction.

“We are here this afternoon to show our displeasure to the Federal Government that it is not all over by forcing us through court injunction and intimidating us by holding our salaries.

“We are not going to give up until the Federal Government do the needful by paying our withdrew salaries and also honouring the agreement signed in 2020.

“The government has signed several agreements with our union, not once, not twice, not three times, but refused to honour the agreement.

“We are telling the public, traditional rulers, religious leaders, well meaning Nigerians, students and parents that all is not well in the Nigerian universities,” he said.

The chairman said that the people should pressure the government to do the needful by honouring the agreement and paying their salaries.

He stressed that lecturers were not casual workers and should be paid.

“The speaker has intervened and we have given him the honour, but the Federal Government should do what it has said.

“If the Federal Government is adamant, the NEC of the union will go back to drawing board, access all the issues and we will take the necessary action,” he threatened.