Atiku an ingrate, Nigerians must not listen to him - Tinubu 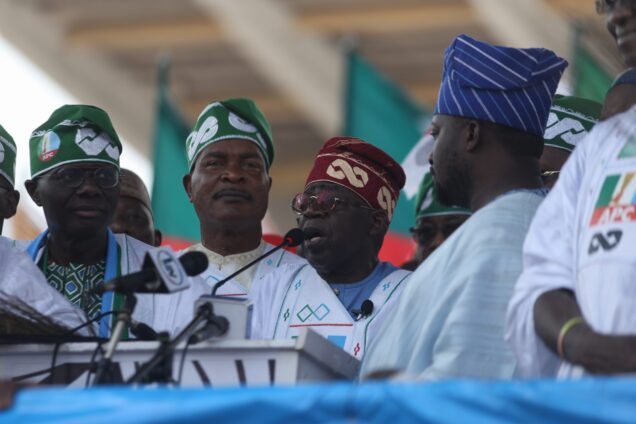 The presidential candidate of the All Progressives Congress Bola Tinubu has labeled Atiku Abubakar an ingrate who does not deserve the attention of Nigerians.

Tinubu issued the attack on the presidential candidate of the PDP while speaking at APC presidential rally in Lagos on Saturday.

He urged his supporters to retire Atiku from politics by not voting for him in 2023.

Addressing the massive crowd at Teslim Balogun Stadium, Tinubu said; “I read this morning where Atiku said he is running for presidency to develop Nigeria. They were in power for sixteen years and they did nothing.

“He (Atiku) has been running since 1999, he ran under PDP, he ran in ACN (Action Congress of Nigeria), and we accepted him. He is an ingrate. He is not supposed to run again. Don’t listen to him, use your votes to retire him.

Speaking further, Tinubu vowed to carry on with the policies of the President Muhammadu Buhari administration, assuring Nigerians that everybody would be carried along.

He also appealed to the crowd to vote for governor of Lagos State Babajide Sanwo-Olu and his deputy for a second term.

The former Lagos State governor described the forthcoming election as a broom revolution that would consume the opposition elements.

He urged Nigerian youths to go out and vote for APC in all positions in the 2023 general elections.

Speaking at the event, Femi Gbajabiamila, described Tinubu as the greatest politician in the modern era of politics.

He urged all supporters of APC to go out and convince those who have not yet decided who to vote for in 2023.

Governor Babajide Sanwo-Olu who also spoke at the event described Tinubu as a visionary leader who will lead Nigeria to prosperity.

He called on Nigerians to vote massively for APC in 2023 and see the country move to greater heights.