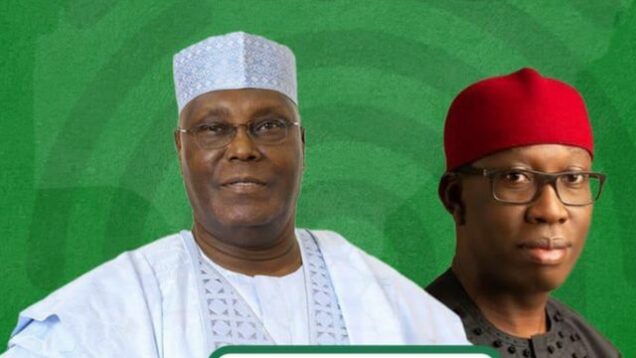 The Atiku Abubakar-Ifeanyi Okowa Presidential Campaign Management Committee of the Peoples Democratic Party (PDP) in Anambra says the party will win majority votes in the state.

Prof. Obiora Okonkwo, the Director-General of the campaign committee, stated this on Saturday, adding that one million votes have been targeted.

He said “We are targeting not less than one million voters who will troop out en-masse on the day of the election, cast their votes for the PDP and defend their votes.

At a management meeting of the committee on Saturday in Awka, Okonkwo said that it had received reports on support groups working for the party in the state.

His pronouncements are contained in a statement issued after the meeting by Mr Uloka Chukwubuikem, Deputy Director, Media and Publicity, PDP Presidential Campaign Committee in Anambra.

He quoted Okonkwo as saying that the management committee was confident that the Anambra electorate would give the majority of their votes to PDP as had been the pattern since 1999.

According to him, the committee has received reports from the deputy director for volunteer and support groups that more than 200 support and volunteer groups in the state have been harmonised.

The support and volunteer groups have a combined membership of more than 500,000 across the 5,720 polling booths in the state, he said.

“Mr Onyebuchi Offor, deputy director of the volunteer groups, confirmed that more are still rooting for the Atiku Abubakar presidency in the state and that mobilisation is ongoing.

“Apart from the already harmonised 200 self-funding groups, there are hosts of other volunteer groups that are rooting for PDP’s presidential candidate.

“We have remained a PDP state even when there’s another party at the state level, but the people have continued to vote for a national party with the spread and capacity to win the presidency,’’ Okonkwo also said.

He said the grassroots-based support groups cutting across the 326 electoral wards in Anambra would drive the message of unity and hope to the people and make them vote for its presidential candidate.

Apart from being nationally accepted, PDP parades an array of quality candidates from the president to the House of Assembly “which is what is important to Nigerians at this time.

“It is obvious that our people have begun to give credence to our message; they have taken note of the fact that an Atiku Abubakar presidency is inevitable given the realities on the ground, so Anambra will vote PDP,’’ Okonkwo stressed.