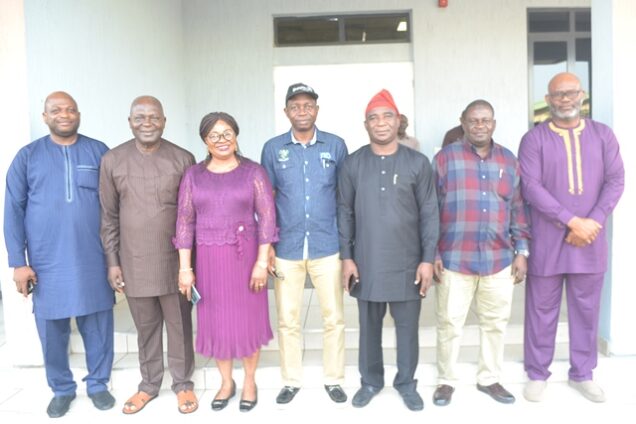 Onafowote and others at the event

The Lagos State Head of Service (HoS), Hakeem Muri-Okunola, has urged Public Procurement Agencies of  States of the Federation and the Bureau of Public Procurement (BPP) to continue to synergise, network and share ideas that can further assist governments at all levels in the country to manage their resources in an efficient and sustainable manner.

The Head of Service, who was represented by the Permanent Secretary, Office of the Head of Service, Public Service Office, Mrs. Olasunkanmi Oyegbola, gave the charge during a courtesy visit paid to his office by the Chief Executive Officers of Public Procurement Agencies of five States of the Federation who were in Lagos on an exchange programme with the Lagos State Public Procurement Agency.

While commending the Nigeria Governors’ Forum (NGF) which facilitated the exchange programme for finding the Lagos State Public Procurement Agency worthy for hosting the team,  the Head of Service enjoined the NGF to continue to facilitate knowledge sharing among Public Procurement Agencies nationwide so that public procurement system of the States of the Federation could fully comply with international best practice.

He pointed out that the Babajide Sanwo-Olu Administration in the State is passionate and committed to any programme or system that could enhance accountability and efficiency in the management of the resources available to the State Government.

Muri-Okunola added that in recognition of the enormous contributions of the Lagos State Public Procurement Agency in ensuring accountability and transparency in the management of public funds for the provision of goods and services for the people, the State Government will continue to support the Agency to enable it to continue to discharge its statutory duties effectively.

The Head of Service further pointed out that the special position occupied by the State as the number one centre of commerce, business and industry not only in Nigeria, but in the entire West African sub-region, has made it imperative for the State Government to go the extra mile in ensuring sustainable growth and development in the State, adding that the State Government will, therefore, continue to demonstrate the political will to strengthen public procurement system in the State.

Also speaking while receiving the visiting team in her office, the Special Adviser to the Governor on Works and Infrastructure, Engr. Aramide Adeyoye, noted that because everybody sees Lagos as a land full of opportunities, the State has continued to receive influx of people from far and near on a daily basis.

While stressing that it is not a crime for people to migrate to the State, the Special Adviser pointed out the need for such migrants to be productive and contribute positively to the development and wellbeing of the State.

Engr. Adeyoye also explained that in a bid to keep up with the pace of the demands of a rapidly growing population of the State, the State Government has constructed several new roads across the State within the last three years.

Director- General, Lagos State Public Procurement Agency, Mr. Fatai Idowu Onafowote, attributed the success of the Agency, particularly in e-Procurement, to the Agency’s commitment to the realization of the State Government’s vision of making Lagos a Smart City and attaining a 21st Century Economy status where technology will be the chief driver.

The Director-General also disclosed that with the deployment of e-Procurement system, the Agency has not just assisted the State Government in facilitating the success of the policy on the ease of doing business in the State, but has also greatly assisted in increasing the Internally Generated Revenue of the State Government.

Onafowote also pointed out that another factor that has been assisting the Agency is that the Agency carries out a lot of capacity building programmes for the procurement personnel as well as regular engagements with key stakeholders in public procurement, including the Accounting Officers of MDAs of the State, contractors and service providers, among others.

He also stated that the Agency is always ready to share its experiences in public procurement with Procurement Agencies of other States of the Federation and any other body or organisation just as it is ready to learn from others so as to enhance the capacity of the Agency to discharge its responsibilities.

Affun explained that the Lagos State Public Procurement Agency was chosen as host of the exchange programme based on the level of its roll out of the e-Procurement application and publication on the Open Contracting Data Standards (OCDS) platform.

As part of the exchange programme, officials of the participating States had interactive sessions and also visited the construction site of the Opebi Link Bridge and ​Approach Road in Ikeja LGA being constructed by the State Government.