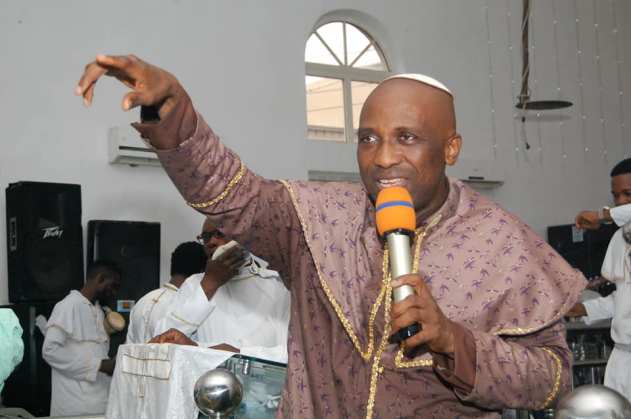 The Leader Of INRI Evangelical Spiritual Church, Primate Elijah Ayodele has sent warnings to the major contenders in the race to become the next president of Nigeria.

In a statement signed by his media aide, Osho Oluwatosin, Primate Ayodele said all the candidates have potential but their ambitions have clauses that can make or mar them.

Speaking on the All Progressive Congress, Primate Ayodele noted that the Muslim-Muslim ticket of the ruling party is the clause for its candidate, Asiwaju Bola Ahmed Tinubu and that this will scuttle the chances of the party.

He explained that those with the candidate will disappoint him before the election.

For PDP’s Atiku, Primate Ayodele advised the candidate to humble himself and settle the crisis within his party because the division will jeopardize his chances at victory.

The cleric told him not to ignore the five aggrieved governors in the party because their annoyance will affect his chances.

‘’The three major contenders have their potentials as revealed by God but there is a clause in the presidential race they are all running.’’

‘’The clause for the APC is the Muslim-Muslim ticket, if they can make it Christian-Muslim, they may have better chances. The people following Tinubu will disappoint him, and those he believes in will disappoint him. I don’t hate the APC candidate, I love him because he is a man of creativity.’’

‘’As for Atiku, He should humble himself and still persuade Wike. He can turn whatever is bad in Wike to good. He shouldn’t ignore these five governors because their annoyance can jeopardize his victory. He needs to re-strategize. He should ignore whoever asks him to neglect the governors.’’

Primate Ayodele called on the candidates to be careful of the crowd they have because lots of things will change before the election.

Also, he dismissed claims that there may be a run-off, making it known that whoever will win, will win.

‘’Many things will still change before the election, not all the crowd they are gathering will vote for them, they need to work extraordinarily. Let’s forget about run-off or inconclusive, The winner will win and the losers would win.’’