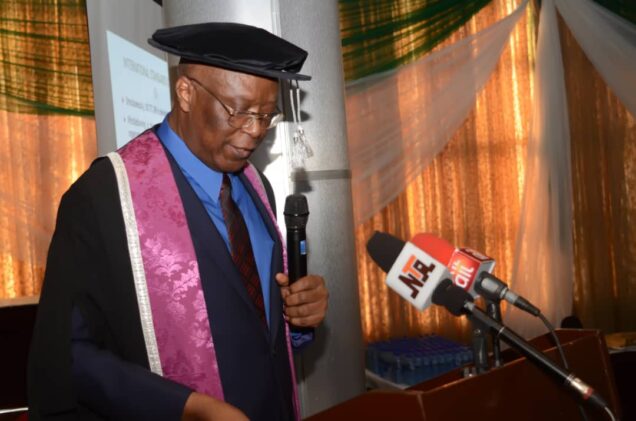 With campaigns on-going for various elective positions in the 2023 general elections it is imperative at this time to reflect on the type of person Nigeria needs to elect to the office of President. What really are the expectations of Nigeria?

Without a doubt, Nigerians want to have a country that works; that can provide the basic everyday needs of her citizens; whose leadership is imaginative, creative and can transform Nigeria from being perpetually “a country with great potentials” to one where those potentials become a reality with actual gains and positive results in all spheres of life.

We need a President under whose watch and inspiring leadership we can change the narrative about Nigeria being a potentially great country; a President that will ignite the engines of growth which will result in actual gains and true greatness.

We need a builder who will not only position Nigeria on a new trajectory towards the realisation of her full potentials but will set the tone for the sub-national units to emulate.

In 2023 and beyond the narrative must change in a remarkably different way by electing a President who can build the Nigeria of our dreams.

The only way to decide who best meets these requirements amongst the Presidential candidates is to examine the track records of each of them. T

his determination can be best made not through blind emotions, anger, hatred, envy, insults or protest but by a calm, sober and dispassionate assessment of the antecedents and track records of the candidates who seek to be our President.

We have reached a defining moment for Nigeria when we must seize the opportunity to lift our country out of the throes of backwardness so that it can join the league of developed nations.

Many formerly under-developed countries like ours have since left us far behind in the development index. We have gone past the time of rhetorics and bare campaign promises (and politicians the world over are notorious for promises not kept) but must assess each candidate by what he had done before in public office as a pointer to what he is likely to be able to do in the higher office of President.

Manifestos and debates have their place but much more important is the ability to fulfil campaign promises supported by past records.

The President that Nigeria needs in 2023 and beyond is one that can build our country to the standard we all desire and expect it to be as demonstrated, not by mere rhetorics but by evidence that all can see.

The candidate that best meets this description is, without a doubt, Asiwaju Bola Ahmed Tinubu the APC Presidential candidate.

The evidence spans various spheres of what it takes to build a nation to greatness. With Tinubu, Nigeria will break away from backwardness and be positioned irreversibly on the path of development and greatness.

He proved this in Lagos when he assumed the office of Governor in 1999 by laying a foundation which his successors have continued to build upon in diverse spheres to the admiration of all fair-minded persons. A few illustrations will suffice.

Before 1999, Lagos used to have the infamous distinction as one of the dirtiest and most disorganised cities in the world but under Tinubu as Governor and till date the situation has changed.

Inspite of the challenges of an ever increasing daily migration, Lagos now wears a new look with good roads, improved infrastructure and institutions like LAWMA, LASTMA, etc, that are being emulated by many States and even the Federal government on issues like Justice Sector Reform.

New areas of development have been opened up in the Lekki axis with beautiful aesthetics and a well-planned environment hosting the newly commissioned Lekki Deep Sea Port, Dangote refinery and an on-going international airport.

Eko Atlantic City has transformed hitherto erosion ravaged Bar Beach to a model city comparable to Dubai and other dream destinations across the world to the extent that the United States of America is building there perhaps one of its most expensive missions in the world.

Tinubu as Governor identified the best brains (something he is known for) to help him actualise his vision for a new Lagos and they gave a good account of themselves. Today one of his former Commissioners is the Vice President of the Federal Republic of Nigeria; some are Ministers and many others hold high offices in government both elective and appointive. None of his contemporaries has achieved this.

With his party AD controlling only Lagos State in 2003, Tinubu through his sagacity and deft political manoeuvring transformed it to AC, ACN and ultimately APC which is now the ruling party in Nigeria – this mostly at the expense of PDP whose leadership were consumed in arrogance, wickedness and misrule, believing the fake promise of ruling for 60 years.

They were swept away after 16 terrible years for which they owe Nigerians an apology and atonement, not ask for their votes.

Tinubu harnessed the energy of the youths in Lagos by providing them with employment opportunities in state institutions established by government and private sector enterprises enabled by an investment-friendly environment.

By ensuring periodic elections into the 57 Local Governments and Development Area Councils in Lagos State, Tinubu opened up more opportunities for youths to be actively engaged in governance thereby preparing them for participation at higher levels. One of his Local Government Council Chairmen rose to become a Senator.

By giving opportunities to youths to participate in legitimate endeavours Lagos State has witnessed a massive decline in violent crimes and other vices.

The new look Oshodi, formally a den of robbers, attests to the success of Tinubu and those he helped successively to occupy the position of Governor of Lagos State. I can go on and on but I believe the point is clear.

His many other accomplishments are common knowledge. Of all the front-line Presidential candidates Tinubu is the most religious tolerant.

Amongst the candidates he scored the best grades in the University and exhibited exceptional intelligence unmatched by any of his co-contestants.

The challenges facing Nigeria today were faced by Tinubu in Lagos State, though on a smaller scale but by establishing a standard and laying a good foundation, Lagos has surmounted most of the limitations to become the fifth largest economy in Africa.

You can imagine what Nigeria stands to gain if and when he leads as President. This is one in a life-time opportunity for Nigeria and we must not allow it to slip through our fingers.

Tinubu has the vision and capacity to build the foundations of a new Nigeria in the same way that Lee Kuan Yew of Singapore, Mahathir bn Mohamad of Malaysia and Paul Kagame of Rwanda pulled their respective countries from poverty to prosperity.

I am not unmindful of the various criticisms and reservations that some have expressed against Tinubu and I do not imagine that he is a saint. No one is perfect.

Curiously, many of the opponents agree that he will make a good President but continue to rehash the reservations.

These, I dare say, no matter how well embellished they are with crude jokes, mockery, photos and videos real or fake, are not weighty enough to deny Nigeria the benefits that a Tinubu’s Presidency can bring.

It is commonly said that Tinubu is not a good public speaker and is slow or sluggish in speech.

When God decided to free the children of Isreal from captivity in Egypt he chose Moses who was slow in speech and a stammerer. He did not choose an orator.

Despite his self-confessed lack of eloquence Moses successfully took his people from Egypt, crossed the Red Sea and led them safely to the promised land.

Some say that Tinubu was indicted or convicted for a drug-related crime in the United States of America in 1993 but the US government issued a statement in February 2003 to say that their government has no criminal record against Tinubu.

It simply makes no sense for any Nigerian nearly 20 years later to continue to contest or contradict the unequivocal official statement clearing Tinubu of links with any crime in far way US.

To do so is to imply or suggest that the U.S. statement is false which will be very ridiculous, to say the least.

Again, it beats my imagination that people are insisting that Tinubu must display his primary and secondary school certificates even when he has provided to INEC his Chicago State University certificate, a qualification higher than the minimum required under our Constitution.

The only logical deduction from all these accusations, even from among many who do not doubt the leadership acumen of Tinubu, is that these are all they can hang on to in their desperate opposition to his candidature.

It is the same reason they continue to bandy about allegations in the libellous TV documentary, “The Lion of Bourdillon”, for which its publisher has publicly apologised to Tinubu.

In conclusion, my strong advice and appeal to Nigerians is that they should disabuse their minds of sentiments, bitterness or hate and, for the good of our country, elect a President who can transform Nigeria, not a debating champion.

That transformational leader who has demonstrated capacity by a wide margin is Senator Asiwaju Bola Ahmed Tinubu.

He is the President that Nigeria needs in 2023. He deserves our votes.