Casemiro's late strike against Switzerland sends Brazil to Round of 16 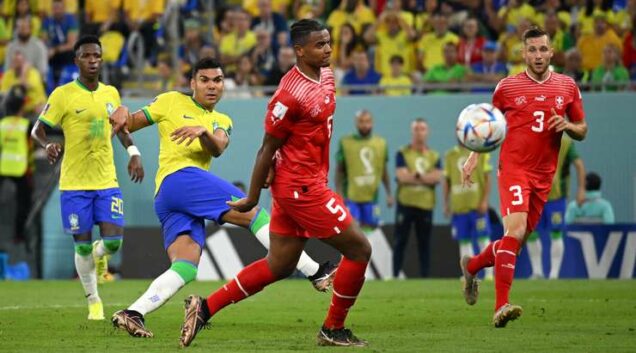 Casemiro scored a late goal on Monday as Brazil beat Switzerland by 1-0 to qualify for the Round of 16 at the ongoing World Cup in Qatar.

The first half ended goalless and the match was also heading for a draw in the second half when Casemiro struck on 83rd minute to give Brazil the victory.

Rodrygo played the ball to Casemiro, whose deflected shot from inside the box went past the helpless Yann Sommer.

Earlier on 27th minute, Vinicius Junior got on the end of a pass and produced a promising first-time shot towards the left side of the goal. His effort was blocked by Yann Sommer with a brilliant diving save.

On 64th minute, Casemiro slipped a clever pass through to Vinicius Junior, who moved inside the box and sent a measured shot beyond the keeper and into the bottom right corner.
After VAR’s review, the referee ruled out the goal for offside.
On 87th minute, Rodrygo produced a good strike towards the roof of the net, but the goalkeeper showed great reflexes and dived to keep the effort from hitting the net.
Tags:   Brazil   Casemiro   Switzerland