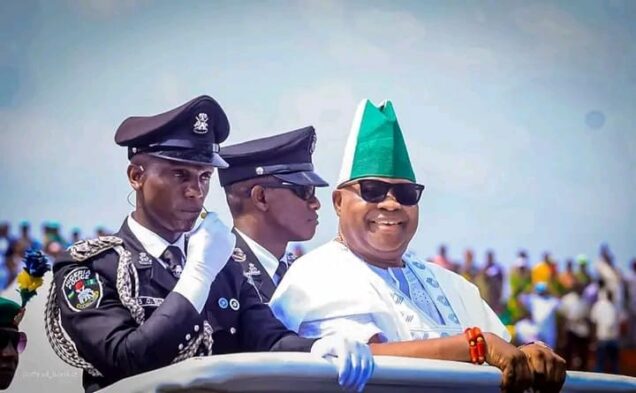 Osun civil servants working at the State Secretariat in Abere, Osogbo, on Monday received the newly sworn-in Governor, Sen. Ademola Adeleke, to his office amidst pomp and pageantry.

The workers who had been waiting at the entrance of the State Secretariat since 8.00 a.m. were seen singing and dancing in anticipation of the governor’s arrival.

Security officers were stationed with the workers, while members of the Peoples Democratic Party (PDP) joined the workers to welcome Adeleke.

The governor, who later arrived at the Secretariat at about 12.30 p.m., after attending to some party activities at his campaign office on Osogbo-Gbongan Expressway, was seen waving at the crowd from his car.

The crowd of civil servants at the main entrance to the Secretariat, however, caused traffic gridlock on the highway for both motorists and commuters.

Adeleke and his Deputy, Kola Adewusi, were both sworn in as the sixth Executive Governor and Deputy Governor of Osun State on Sunday by the state Chief Judge, Justice Adepele Ojo.

Adeleke was administered with Oath and Allegiance of Office by the state Chief Judge at exactly 11.47 a.m, while that of his Deputy was done earlier at 11.36 a.m, at a colorful ceremony held at Osogbo City Stadium.

Adeleke had defeated Adeboyega Oyetola, then the sitting Governor of the All Progressives Congress (APC) at the governorship election held on July 16.

Watch the moment Adeleke was welcomed by Osun workers below: