Why Nigerians should elect Tinubu president in 2023 – AMBV4BAT 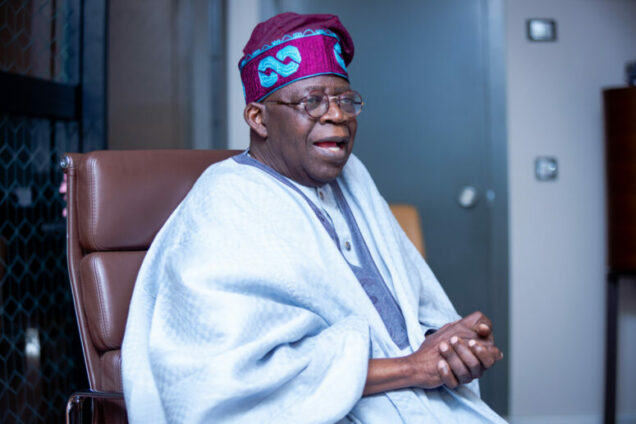 The Abibat Mogaji Beneficiaries Vanguard for Bola Ahmed Tinubu (AMBV4BAT) has said the presidential candidate of the ruling All Progressives Congress (APC), Asiwaju Bola Ahmed Tinubu is the most competent of all candidates aspiring to occupy the highest political office in Nigeria in 2023.

The National Coordinator of AMBV4BAT, Alh. Salman Akorede made this known at the press conference organised by the group in Shangisha, Lagos on Sunday 27 Nov.

Akorede explained that the conference was organised to educate Nigerians on the rare qualities of Bola Tinubu and the reasons they should vote for him to restore the glory and prosperity of the country.

According to him, the electorate seek to elect leaders because they need prosperity, adding that Nigeria needs Bola’s heart of generosity; his progressive vision; strategic skills and competence in governance to lead it on the path of progress and prosperity.

He said Bola Tinubu inherited the heart of generosity from his late mother, Alhaja Abibat Mogaji.

“Mama was a mama in totality. She supported everybody, in fact, I went to my first hajj through Alhaja Abibat Magaji. I was only 21 years old. She just called me and said I want you to be an Alhaji, and that was it. I didn’t have anything, but she provided everything. That was mama for you, and she did that for so many people, whether she knew you or not.

“Her generosity was not limited to sending people to hajj. When you need anything and you go to her, she would respond to you. Asiwaju, being a true son of Alhaja, born, bred and mentored by Alhaja, has imbibed the spirit of generosity of his mother, Alhaja Abibat Asabi Magaji.

“If you have been following his political style, his leadership style, everybody will tell you that Asiwaju has a very large heart. He does not care where you come from, whether you are a Yoruba, a Hausa or Ibo, or you are from the West, or South or from the North. If you have a chance to meet Asiwaju Bola Ahmed Tinubu, you would respect him for his large heart, his generosity, his love, and his leadership.

“So many orphans were educated and mentored by Asiwaju Bola Ahmed Tinubu. As a leader in government, he hired people from across Nigeria. His cabinet was filled with people across Nigeria. And that has defined his political style. A few days ago, I was trying to analyse the kind of support that Asiwaju enjoys nationwide and I said it can only be from Asiwaju because he has spread his tentacles across the nation.

“Asiwaju is a leader that has touched so many lives, and that is why you could see the number of people that have risen in support of him nationwide. He is not giving anybody anything, people are just doing it willingly. I can’t imagine a kind of support that is better than what he is getting from across the country. I have travelled all over the country. Since this project started, I have interacted with people from all regions and I could see the passion with which people responded”, Akorede narrated.

While responding to the question of Tinubu’s competence, Akorede retorted: “So, what kind of leader do you think we need in the country now? Is it one who does not know even what to do? Nigeria needs someone with a very clear mind, a clear purpose who knows the destination. He has a roadmap. He is very wise, well-educated and very intelligent. He is very competent, he has done it in Lagos.”

On allegation of ill health, he said Tinubu was very healthy and fit. He said a man who has been going around the country campaigning and who visited all states of the Niger Delta in less than five days could not be said to be sick.

On the fear of the Muslim-Muslim ticket, he assured non-Muslims in the country to entertain no fear, saying Tinubu is a liberal leader who does not discriminate against any religion. He buttressed his view by pointing to the religious preference of Tinubu’s wife who is a pastor of the Redeemed Christian Church of God, and with whom Tinubu has been married for close to forty years, adding that if Tinubu was a religious bigot he would not have tolerated that.

He clarified that the choice of Kashim Shettima as Tinubu’s running mate was based on competence and track record. He assured Nigerians that Tinubu would run an all-inclusive government if voted to power.

On the state of the economy, he said Tinubu would address the rising inflation and put the economy on the path of recovery when elected.

He urged all members of the group and the electorate to ensure they have their Permanent Voter’s Cards, PVCs, saying it’s the only tool they needed to put their preferred candidates in public offices during the elections.

He advised those who were yet to get their PVCs to take advantage of the card collection period extension by INEC to collect their PVCs.

The Coordinator said his group which, according to him, has presence in over fifteen states of the federation was determined to take its campaigns to the grassroots across Nigeria, engaging the market men and women, the youths and all other segments of the society.

Akorede informed that his group had mapped out a strategy to effectively communicate Tinubu’s ‘Renewed Hope’ document to the grassroots, adding that his team would deploy its members’ skills, exposure and technology for mass mobilisation for the Tinubu presidency.

He pledged his group’s resolve to ensure that the electorate were convinced that Tinubu was the best man for the job, vowing that” Inshallah, he will get there and rescue Nigeria from the rot”.