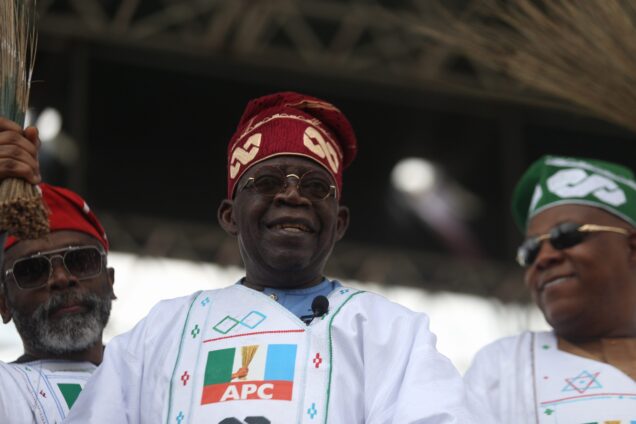 Chief Ayuba Gufwan, Director Mobilisation of the Directorate of Persons with Disabilities (PWDs) of the APC’s Presidential Campaign Council (PCC), has slammed PDP for comments against Bola Tinubu.

A chieftain of the opposition Peoples Democratic Party (PDP) was reported to have referred to APC presidential candidate as a handicapped person.

Reacting to the report, Gufwan said Tinubu will run an all-inclusive and non-discriminatory government if elected in 2023.

He told newsmen that the derogatory comments by the PDP chieftain had some negative effect on PWDs across the country.

“This is to express my deep displeasure at the reckless, irresponsible, and heightened discriminatory comments by the PDP chieftain on PWDs and against the person and dignity of Sen. Bola Tinubu.

“At the PDP rally held recently in Maiduguri, the PDP chieftain likened Tinubu’s alleged health challenge to that of PWDs.

“When translated to the English language from his Hausa language narrative, he said: `let me ask: between a cripple and one that has legs, which one do you prefer?

“The crude and foul language to say the least, very offensive as it is, portrays those who are crippled or living with disabilities as totally unfit and improper to be allowed to be elected into public office.

“No PWD and even non-PWDs created himself or herself rather nature and other man-made factors made them to be in the conditions they are in.

“It is sad that a party will make such unpalatable mockery of the condition of bonafide citizens it seeks to govern.

“The 1999 Constitution frowns at any iota of discrimination in any form and substance,’’ Gufwan added.

Meanwhile, he stressed that such a statement presented the PDP as a party that has crude hatred for PWDs and unfit to be voted into any position in the country.

The director cited the example of former President Delano Roosevelt that became President of America on a wheelchair and added that Tinubu has the mental capacity and ability to move Nigeria forward.

“By making such a reckless statement, the PDP showed ignorance and hatred and also forgot that many decades ago, Mr. Franklin Delano Roosevelt, a PWD served efficiently and successfully as the President of America.

“This has set a precedent that PWDs can be elected and entrusted to hold public office as long as they meet the Constitutional requirements and have the mental capacity to occupy the office.

“Physical disability is not an encumbrance for the pursuit of any office.

“As Tinubu doth say: the 2023 election is about who has the mental capacity, intellect, and political sagacity to govern this great country, to inspire hope, and lead it to prosperity.

“The PDP and opposition are advised to stick to issue-based campaigns and realities of the times other than go on uncivilized attacks on personalities,’’ Gufwan advised.

He promised to take legal action against the PDP chieftain and his party and called on the Inspector General of Police and the National Human Rights Commission to investigate the matter.

He also called on all PWDs in Nigeria to vote for Tinubu in 2023, insisting that he is the only candidate with a defined blueprint that would address their current plights.

“By this, I call on millions of PWDs across the nation to have a total rethink and reject the PDP at the 2023 elections.

“Conversely, the APC made history when President Muhammadu Buhari signed the National Commission for Persons with Disabilities Act and appointed a PWD as its Executive Secretary.

“Also, it is worthy of note that APC is the only party which created a directorate for PWDs in its presidential campaign council which is replicated at the states level accordingly,’’ Gufwan stressed.