How to stop frequent attacks on INEC's facilities - Yakubu 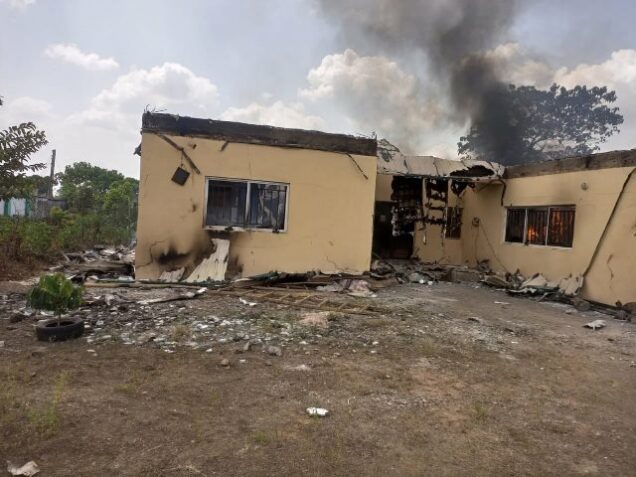 The Independent National Electoral Commission (INEC) on Wednesday said timely arrest and prosecution of perpetrators of attacks on its facilities and assets nationwide would end the trend.

The INEC Chairman, Prof. Mahmood Yakubu, said this at the opening of a two-day Induction Retreat for the commission’s Residents Electoral Commissioners in Lagos on Wednesday.

The News Agency of Nigeria (NAN) reports that the retreat is organised by the United Nations Development Programme (UNDP).

In his opening remarks, Yakubu said that in the last four months, five local government offices of the commission were attacked by unknown persons.

According to him, critical facilities and assets are lost to those attacks, hence the need to curb the trend urgently.

He said: “These facilities including a total of 1,992 ballot boxes, 399 voting cubicles and 22 electric power generators as well as thousands of uncollected PVCs (Permanent Voter Cards) among many other items.

“These attacks must stop and the perpetrators apprehended and prosecuted. Our responsibility is to conduct elections. The best solution for us is the arrest and prosecution of perpetrators.

“The ultimate solutions are the arrest and prosecution of the culprits so that vandals and arsonists do not feel that bad behaviour is acceptable in our country. It is really very sad as elections approach.

“However, I want to assure Nigerians that we will recover from these attacks, those materials will be replaced, but there is a limit to our ability to keep replacing lost items with just 86 days to the general elections.”

According to him, the commission would continue to work with the security agencies, traditional and community leaders and all well-meaning Nigerians to stop the attacks.

He said that INEC was committed to ensuring that nothing would stop the elections from going ahead as scheduled ,”and the will of Nigerian people will prevail. That is what we have been assuring Nigerians about.”

On the retreat, Yakubu said that it was part of the preparation for the 2023 general elections.
“We are having a retreat involving all the Residents Electoral Commissioners as we are aware 19 of them were sworn in about four weeks ago.
“We felt that there should be an induction retreat for them to familiarise themselves with the processes and procedures because the election is holding in the next 86 days,” the INEC boss said.
He said that the retreat would also dwell on standard operating procedures on the collection of PVCs, guidelines to voters distribution to polling units, framework for electoral logistics and code of conduct for commission’s members, officials and staff.

Yakubu said that copies of code of conduct for members, officials and staff would be made available for all.

He added: “I want to reiterate that our success ultimately depends on our integrity. We should remain independent and impartial.

“Our responsibility is to uphold the sanctity of the ballots, nothing more and nothing less.”