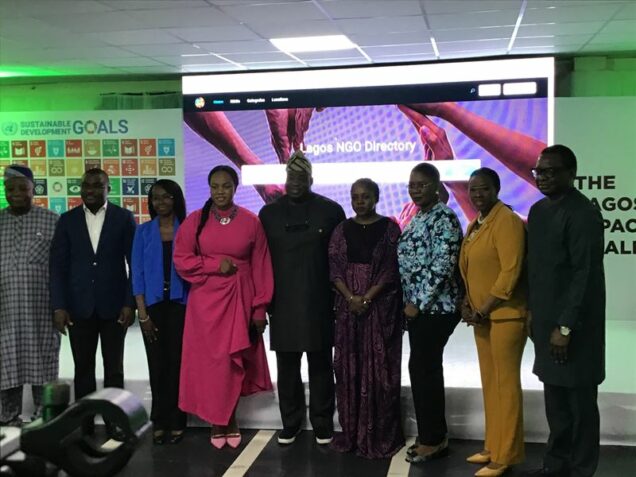 Hammond with top government functionaries at the event.

The much awaited Lagos SDGs Impact Grant Challenge Initiative to offer grants to Civil Society Organisations, CSOs and Non-Governmental Organisations (NGOs) was on Tuesday launched by the State Government.

The grants is meant to implement critical projects bearing key relevance to the actualisation of the SDGs in the State.

The grant challenge seeks projects that offer smarter, faster ways to make real progress on the 17 Goals of the SDGs.

The Special Adviser to the Lagos State Governor on Sustainable Development Goals (SDGs) and Investments, Mrs. Solape Hammond, who launched the grant challenge on Tuesday in Ikeja, Lagos, said N5 million each would be granted to three winning ideas that targets each of the SDGs.

According Hammond, the competition would enable the state government create a broader-based collaboration with the CSOs, NGOs and social entrepreneurs who are already implementing solutions to achieve the SDGs.

She said applicants who must have successfully passed eligibility screenings would be required to submit one project idea that addressed one of the 17 Global SDGs, adding that the project must reflect a specific KPI, and an estimate of the people that would be impacted by the project.

Hammond  explained that what the government was trying to do with this project was to take that further, to bring together all the Impact Makers whether they are CSOs, NGOs, Social Impact Ventures, all those who are working and creating change around Lagos, to mainstream the SDGs.

“We are going to pick three projects across each of the 17 SDGs and work with them to implement these projects over a period of three months, bringing volunteers together to deliver on these projects,” she said.

The special adviser stated that the challenges gathered from stakeholders informed the launching of the Lagos NGO Directory as a database platform for NGOs to connect with the government on its programmes and activities as well as understood what the opportunities were in the Government.

“Really, all we are saying is this government cares for Impacts Makers and we know that we need that partnership to be able to deliver on the THEMES AGENDA and on the SDGs,” Hammond said.

Permanent Secretary, Office of SDGs and Investments, Mrs. Abosede George, said it would be difficult for the Office alone to achieve the mandate of the SDGs to meet the agenda 20:30, without partnering with NGOs.

George explained that the process is going to be very objective and transparent, saying government was going to do it the way it should be done.

She said if “we say criteria, then we have to go that route. We would encourage people to participate, and once you meet the criteria, you would be given, you don’t need to know anyone.”

Speaking at the event, Tayo Olosunde, founder, Mind the Gap Foundation,  explained that understanding the roles of SDGs is a vitalising roadmap to doing excellently in impact courses to sustainable development with strong structure for businesses and sound initiatives