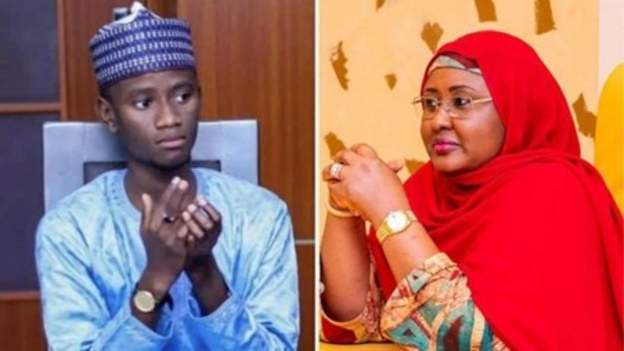 Aminu Muhammad, the student who was arrested for allegedly insulting wife of Nigeria’s President, Aisha Buhari has been sent to Suleja prison.

He was brought before the court on Tuesday.

The student’s lawyer, CK Agu, told the BBC that his client was arraigned before a court in Abuja, the capital of the country, and that he pleaded not guilty to the crime he was accused of committing.

Agu said that since November 25, they asked for Aminu to be granted bail but he did not get it.

“Even in yesterday’s court session, we informed the judge that we requested the police to grant Aminu bail in time, but they did not answer us that they would release him or vice versa.

“Therefore, we requested the court to grant him bail on the grounds of ill health and that he will start school exams on December 5. And now the court has ordered the police force to present the bail request which was filed urgently so that the court can hear the request today or tomorrow,” said CK Agu.

The BBC reports that the parents of student said their son would be brought to court today Wednesday, before his lawyer confirmed that the hearing started on Tuesday, and that there would be another hearing today or tomorrow to consider the request to give him bails.

When the lawyer was asked where Aminu was at the moment, he said, “He is currently being held in Suleja prison before the bail application is heard.”

The detention of Aminu Muhammad who is a student at the Federal University in Dutse in Jigawa State has raised a stir especially on social media, where many people are accusing the government for arresting and detaining him illegally.