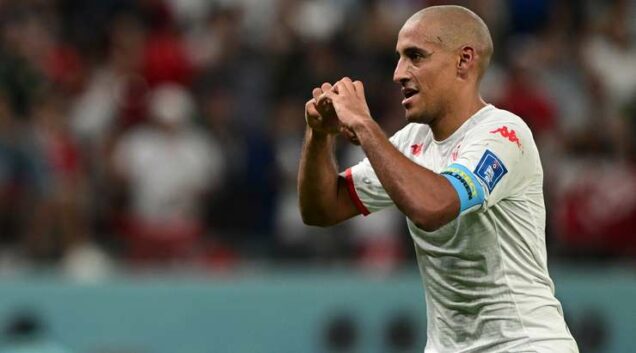 African side, Tunisia claimed a famous 1-0 victory over France on Wednesday, but still crashed out of the ongoing World Cup in Qatar.

Wahbi Khazri scored on 58th minute to give Tunisia all three points, but Australia qualified ahead of them having defeated Denmark 1-0 in the other Group D match.

Khazri made a great solo run and pulled the trigger from inside the box, beating Steve Mandanda with a strike into the bottom right corner.

France had rested nine players from the team that defeated Denmark, as they had already qualified for the next round.

But they brought some of the players in later after Tunisia scored the famous goal.

Earlier, Mandanda had to pulled off an exquisite save to thwart a knuckleball from Khazri , even though it only went towards the middle of the target.

Two minute to duration, Kylian Mbappe went on a mazy run through the defence and got within shooting range inside the box, but his effort to the middle of the target is thwarted by Aymen Dahmen.

On added time, Antoine Griezmann picked up the ball inside the box, found himself in a good position and fired in a shot which was deflected past Aymen Dahmen for an equaliser for France, but the referee ruled out the goal after VAR’s review.

In the other game, Australia claimed another famous 1-0 victory over Denmark, sending the Europeans out of the tournament.

Mathew Leckie scored the only goal for Australia on 60th minute after receiving a delightful pass inside the box and smashed a low shot into the bottom right corner.