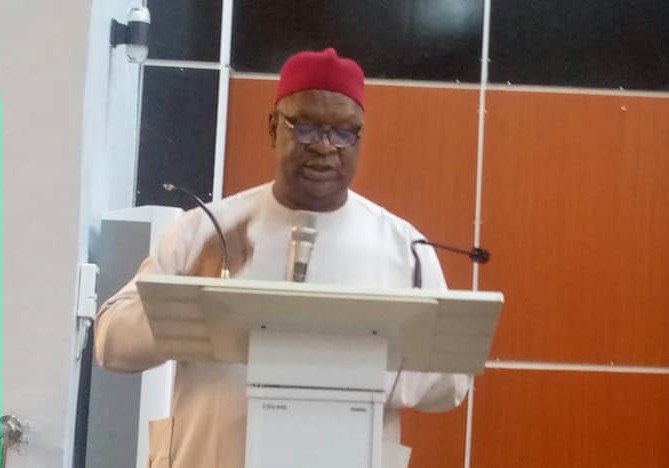 The former Secretary to the Government of the Federation, Sen. Anyim Pius Anyim, said the lack of internal democracy in political parties has become a persistent threat to Nigeria’s democracy.

Anyim said this at the 2022 Annual Political Parties Summit organised by Inter-Party Advisory Council (IPAC) on Wednesday in Abuja.

The summit had the theme: ‘’Political Parties, Elections and the Consolidation of Democracy: Emerging Issues and Needed Intervention in Nigeria’’.

Anyim stated that former Resident Electoral Commissioner for Akwa Ibom State, Mr. Mike Igini, on Feb. 18, 2019, revealed that there were over 640 pre-election cases in courts, emanating from the 2019 general elections as a result of internal party strife.

“The recent squabble over party primaries throughout the country clearly shows that not much has changed and that Nigeria political parties are not operating within norms of democratic principles.

“Various political parties have repeatedly failed to adopt and apply the provisions of their constitution to all party members who are interested in running for office.

“Candidates are imposed on the party without an election and due process, while others are forced to join or cross carpet to other political parties in protestation of apparent lack of fair and equal opportunities in the conduct of party primaries,” he said.

“In Peoples Democratic Party (PDP) for instance, the complaints of the G-5 Governors of PDP is not that the party primary election was faulty but that the pre-and post-primary processes did not guarantee justice to them.

“In All Progressives Congress (APC) also, the Christian caucus is also aggrieved owing to perceived injustice following the Muslim-Muslim ticket.

“Let me, therefore, say that any failure to democracy starts with the political parties,” he said.

Anyim advised that political parties must not only see the conduct of party primary elections as constituting the core of its democratic mandate but must enthrone social justice.

Anyim called for the reformation of political parties to be anchored on social justice.

He said that parties must no longer be structured for the sole purpose of acquiring power, but as vehicles for promoting social justice, articulating policies, and mainstreaming good governance in the polity.

“Processes dealing with modalities for choosing persons to run for or occupy government offices (i.e primaries, selection, nomination, recommendation, etc) must be totally reformed in such a way that it is open, inclusive, transparent and promotes justice, equity, and fairness.

“Issues of money politics, imposition, selective judgment, etc within the party system must be totally eradicated to allow for a more efficient and effective way of running political parties,” he said.

Anyim said that while political parties seemed not to have improved on internal democracy over the years, the Independent National Electoral Commission INEC had made much progress on electoral processes.

He said that INEC’s introduction of the Bimodal Voter Accreditation System (BVAS) and Election Result Viewing Portal (IReV) had largely arrested most of the challenges that previously promoted electoral fraud during elections.

“I must say that with the introduction and use of these two technologies, the recent elections in Ekiti and Osun States appear to meet the appreciable standards of credible free, and fair elections.

“Nigerians expect the same standard in the 2023 general elections.”

Anyim however advised INEC to yield to calls demanding it to subject the BVAS to third party evaluation to ensure it meets standards and integrity.

“I think this call is in the right direction because justice must not only be done but must be seen to be done.

“Nigerians must be at ease that the BVAS technology is not a secret only known to INEC, it must be known to all that BVAS cannot be manipulated,” he said.

Anyim also advised the National Assembly to do more in democratizing the internal mechanisms of our parties through uniform legislation.

“The legislation on political party reforms must be holistic and geared towards improving leadership, capacity, discipline, internal democracy, ideology, and conflict resolution mechanisms within the political parties.

“Again, I dare say that IPAC should champion this,” he said.

Anyim also called on National Assembly to legislate on gross political intolerance by state governors, saying there could not be a democracy, without space for engagement with the electorate.

“In some states, today, holding political meetings and rallies has been banned in public places including markets.

“So, tell me, should campaigns in those states be held in the bedrooms of the contestants?

“My opinion is that the National Assembly should rise to the occasion and legislate on this matter even as the law enforcement agents should protect the citizens’ right to peaceful assembly,” he said.

Anyim added that there was also an absolute need to strengthen Nigerian institutions and the efforts should be championed by IPAC.

He said that should be done by mainstreaming the principles of rule of law and other democratic norms in their operations, beefing up their capacity, improving their independence, and deployment of technology to drive their processes and operations.

“Institutions that are involved with the conduct of elections in Nigeria such as INEC, security agencies, and the judiciary are the main drivers of democracy in any society.

“This is because institutions sustain the democratic process by promoting and maintaining an orderly procedure through which dividends of democracy are delivered to the people.

”Decisions are made, disputes are resolved, and power is transferred from one group to another,” Anyim said.