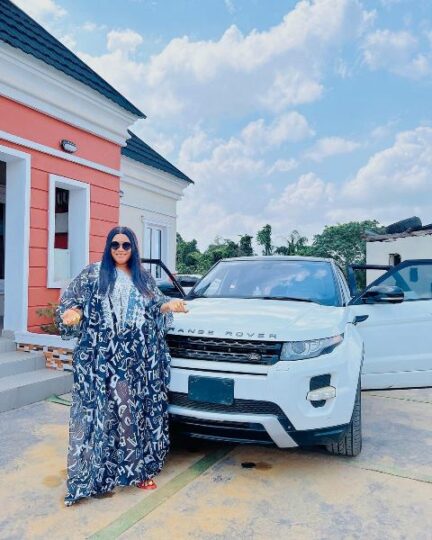 Blessing with her new SUV

Controversial Nollywood actress, Nkechi Blessing Sunday has acquired a brand new Range Rover, thanking God for the feat.
The actress busty actress took to her Instagram page to display photos of her brand new SUV, saying that she bought the same car she sold last year to finish her bungalow.
She wrote: “One year later, I bought the same car I sold to finish this Small bungalow behind me🙏🏻 One whole year of hardwork and sweat, 2022 wasn’t my best year but it ended in praise🙏🏻
“To God Alone be all the glory🙏🏻 and to all the brands that entrusted their business to me to deliver, you all are the biggest part of my success story🙏🏻 and I will continue to carry your business on my head🙏🏻
“Feel free to tap ooo Cus na Contribution money I use buy this car (Ajo) Thrift👏🏻 I no get any sponsor anywhere, but I don’t mind sha Cus I am tired of doing it all by myself😢“
Born on 14 February, 1989, Blessing is an America-based Nigerian actress, film producer, film director, and screenwriter, born and raised in Surulere, Lagos State.
She produced her first movie, Omoge Lekki in 2015, starring herself, alongside Yinka Quadri. In 2016, Omoge Lekki won MAYA Awards and she was nominated for Revelation of the Year at Best of Nollywood Awards.

She also serves as the director and chief executive officer of Nkechi films production, and NBS Foundation.