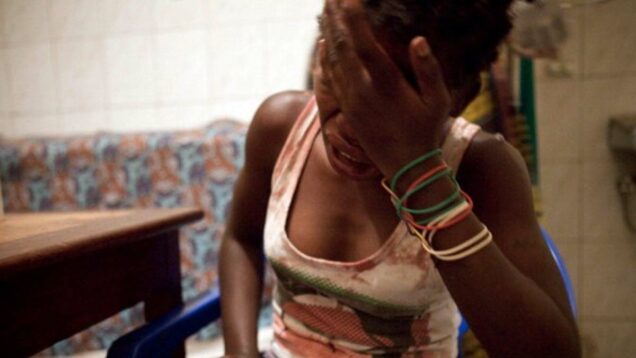 File Photo of a girl under abuse as illustration

The Nigeria Immigration Service (NIS) on Thursday said it has handed over a 16-year-old albino girl and her 15-year-old sister from Ogun to the National Agency for Prohibition of Trafficking in Persons (NAPTIP).

NIS Comptroller in Kebbi, Mrs Rabi Bashir-Nuhu, told newsmen in Birnin Kebbi that the girls were arrested in Kebbi while allegedly on their way to Libya.

Bashir-Nuhu said that the girls were travelling alone when they were arrested by the immigration personnel in the Yauri Local Government Area of Kebbi.

“It is a pity, in spite of our calls and advice to parents that they should look after their children, they still don’t heed.

“The girls were intercepted at the Yauri border on Nov. 29, as they were travelling from Ogun to Sokoto unaccompanied and alone.

“The officers became suspicious of them, especially the albino elder sister, who should be taken care of, and should all be in school.”

The Comptroller quoted the girls to have said that they were travelling to Sokoto to meet their aunty, who would arrange their departure to Libya.

She said, “They stated that they were going to Libya to do catering, as their elder sister is also working there.

“We have the belief that they were being trafficked to Libya to be used for labour exploitation, prostitution, ritualism or organ harvesting.

“We have to apply Pacts 10 and 11 of the Immigration Act, 2015, receive them and hand them over to the National Agency for Prohibition of Trafficking in Persons (NAPTIP).”

The comptroller assured the public that the agency would not allow any suspicious character or person profiting from human trafficking to pass its net in the state.

Both girls told newsmen that they were picked up by a commercial driver from Shagamu in Ogun and that they were going to Libya with the knowledge and consent of their parents.

Receiving the victims, the Commandant of NAPTIP in the state, Alhaji Misbahu Iyya-Kaura, said that the agency would undertake a thorough investigation into the matter.

“We thank NIS for making our job easier. We are going to investigate the recruitment, transit and the final destination of the victims,” he said.

The commandant commended the NIS for collaborating with the agency to eradicate human trafficking in the country.