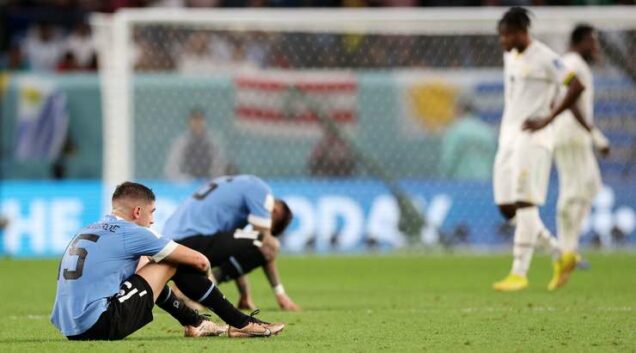 Ghana and Uruguay players down and out

African side Ghana crashed out of the ongoing World Cup in Qatar after succumbing to 0-2 loss to Uruguay on Friday.

Despite the win, Uruguay also crashed out as South Korea beat Portugal 2-1 in the other match to go through as second on goal difference.

Giorgian de Arrascaeta was the hero for the South Americans, scoring the two goals to beat Ghana.

He scored his first goal on 26th minute. An unlucky rebound fell to him and and he scored with a bullet header.

Arrascaeta got his brace six minute later. He showed good awareness inside the box as he latched on to a brilliant pass and fired a first-time shot into the back of the net. Luis Suarez assisted in the goal.

Earlier, Ghana missed a golden chance to take the lead from the penalty spot.

Andre Ayew blew a huge chance to score. He sent the penalty to the bottom right corner, but it was not enough to beat Sergio Rochet who easily stopped the effort.

On 67th minute, Facundo Pellistri drove into the box and hit a tremendous shot that, unluckily for him, flashed just wide off the left post.

Antoine Semenyo, on 80th minute latched onto a loose ball inside the box but slammed it just wide of the right post.
On added time, Edinson Cavani went down under a challenge in the box, but the referee immediately waved away the appeals from all players.
Sebastian Coates also received a brilliant pass and wasted a big opportunity as his shot from inside the penalty area flew narrowly wide of the right post.
In the other game, South Korea beat Portugal 2-1 to go through as second in the group.
Portugal took the lead in just five minutes into the game. Diogo Dalot passed the ball to the feet of Ricardo Horta, who had an empty net in front of him and has no problems in tapping the ball in.

South Korea equalised on 27th minute. Young-Gwon Kim collected the ball deep inside the box from a rebound following the corner kick. He beat the keeper with a sharp low shot in the middle.

South Korea made it 2-1 on added time. It was a superb finishing from Hee-Chan Hwang (South Korea). Heung-Min Son played a fantastic through ball and found Hwang, who reacted quickly to get in front of the goal and fired a low shot from close range past the goalkeeper.
Tags:   Ghana   Portugal   South Korea   Uruguay