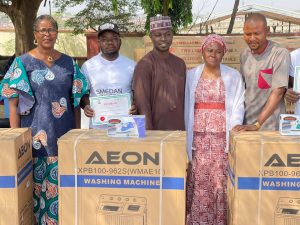 SMEDAN empowerment of 90 beneficiaries in Kwara

The Federal Government has empowered 90 beneficiaries in Kwara through the Small and Medium Enterprise Development Agency (SMEDAN).

Hajia Zainab Abdulmalik, the Kwara Manager of SMEDAN, confirmed this in Ilorin while presenting the empowerment items and tools to the beneficiaries.

She said the beneficiaries were drawn from the 16 local government areas of the state and advised them against selling the materials.

The SMEDAN manager enjoined the beneficiaries to ensure that they grow their businesses with the startup items and tools.

She explained that the empowerment programme was carried out under the National Business Skills Development Initiative, adding that it is targeted at empowering the youth via some vocational skills.

According to her, the beneficiaries were also given some lectures on actual skill acquisition and how to manage their businesses.

Meanwhile, she hinted that SMEDAN has also put plans in place to regularly monitor beneficiaries to ensure they are doing well and get feedback from them.

Mr Moshood Lawan, an Assistant Director, Enterprise Development and Promotion Unit, SMEDAN, Abuja, said the youth have no reason to complain again but to focus on helping the economy grow through their own input.

He urged the beneficiaries to start their businesses immediately and said that the skills they had acquired would be sufficient for them to stand on their own.

Lawan said there are officials of SMEDAN who are positioned to provide beneficiaries with business development services as a follow-up to the empowerment initiative.

About 71 beneficiaries were empowered with an industrial sewing machine, seven received tools for leather works, and 12 people got items to start a laundry business.