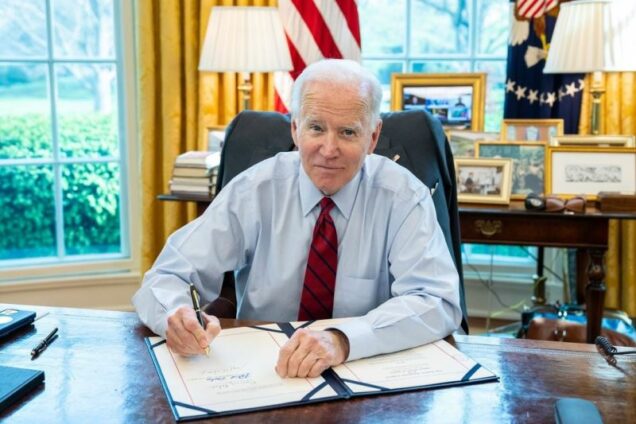 Americans have responded to a question asked by US President, Joe Biden if he was making them proud in doing the job they elected him to do.

Biden had posted a photo of himself in office on his Instagram page and wrote: “You hired me to get things done – I hope I’m making you proud?”

An Instagram user, Excel_with_passion reacted: “I am extremely proud of your performance as our Leader, Mr. President! You are a true blessing from the heavens! Continued Success as our President during your time of service. May God continue to bless and guide thru your remaining years of service! 🙌🙏💜💯😇.”

Sskchristan said: “You know you could reopen the pipeline not everyone makes 100k+ a year and has electric cars.”

htx_marcus21 wrote: “I’m Happy To Have You As Our President 🇺🇸😎 Unlike Most People In This Country. I’m Not COMPLAINING Nor B*tching.“
dmh.insta said: “Yes. I Despite the GOP roadblocks, you’re getting things done!“
joflow_94 wrote: “Hell yeah I’m proud of you Mr President. Getting far more things done than what the GOP is saying. 🙌“
jketz31 said: “Best midterms in history for a first term President. Damn proud.
vegan.feline added: “Very proud Mr President!! So very thankful to be rid of all the drama in the Whitehouse!! 💙💙.”
reneeregine wrote: “Yes Sir President Biden. You are OUR Commander & Chief. Re-elect! 🇺🇸.”

derekhartley91 added: “Republicans: he’s old and senile and can’t do anything! Also republicans: omg he’s passing ALL this bad stuff and ruining the country! So moral of the story is you can GSD and if people like Trump and Mitch McConnell hate it, I think we are on the right path.”