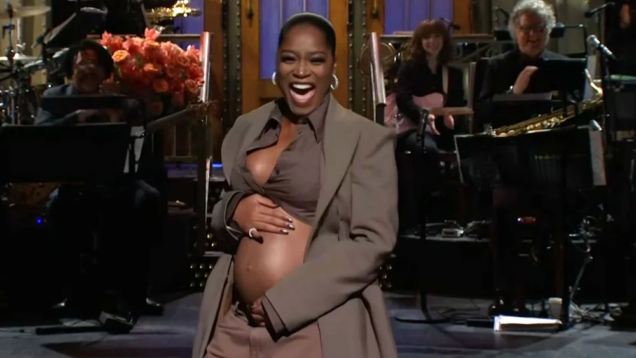 Hollywood sweetheart, Keke Palmer has announced that she is pregnant and expecting her first child in 2023.

She made the announcement on Saturday night while on the NBC Saturday Night Live show.

Ripping a long brown jacket open to reveal her baby bump, she said, “There are some rumours going around, people have been in my comments saying, ‘Keke’s having a baby, Keke’s pregnant,’ and I wanna set the record straight—I am!”

“I gotta say, though, that it is bad when people on the internet spread rumours about you y’all, but it’s even worse when they’re correct.

“I mean, like, I was trying so hard to keep it on the down low, ’cause I got a lot of stuff going on, you know?” she continued. “… But honestly this has been the biggest blessing, and I am so excited. Guys, I’m going to be a mom.”

“Even though some people feel a little weird about me having a baby cause I was a child actor, I just wanna say, look, I’m 29, I’m grown, I have sex, I own a home, I stormed the Capitol on January 6, you know? Things adults do.”

Reports have it that she is in a secret relationship with her boyfriend, Darius Jackson.