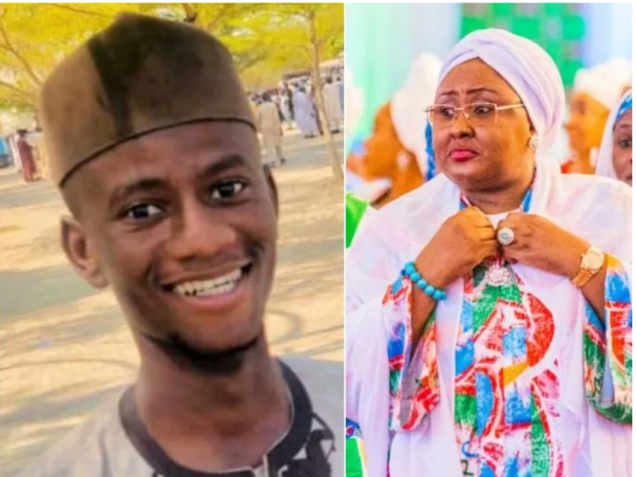 Aminu Muhammad, a student of the Federal University Dutse (FUD), who got into trouble after he trolled Aisha, the wife of President Muhammadu Buhari, has apologized to her.

Mrs Buhari withdrew her case against Aminu, following the intervention of well-meaning Nigerians.

The prosecution counsel, Fidelis Ogbobe was reported to have said that the First Lady as the mother of the nation decided to withdraw the case.

He relied on Section 108 subsection 2(a) of the Administration of Criminal Justice Act to move the application for the withdrawal of the case.

Aminu was earlier arrested and remanded in the Suleja correctional facility in Niger State last week after he was charged to court by the police.

He was arrested by security operatives on November 18 over a tweet that appeared to mock Aisha.

He was released on Friday evening after Aisha dropped the case.

Aminu, a final-year student of the department of environmental management, posted a tweet in Hausa in June 2022 that reads: “Su mama anchi kudin talkawa ankoshi”.

It was accompanied by a photo of Aisha, loosely translated as “Mama has eaten poor people’s money and is now full”.

He has, however, apologized for his indiscretion and promised to change for the better.

Aminu’s apology to Mrs Aisha Buhari as published by the NATION reads: “I would like to use this medium to express my sincere apologies to those I’ve hurt especially our mother, Aisha Buhari. It was never my intention to hurt your feelings and insha Allah I will change for the better. However, I’m also grateful for your forgiveness, thank u mama.

“I would also like to use this medium to express my heartfelt gratitude toward those that helped me go through the darkest hours of my life, man cannot escape his destiny but my incident should serve as a lesson to all of us. Thank you all and one love.

“To Nigerian students association (NANS), words can’t describe how much grateful I am for your support and guidance. You and the general public are what made my freedom to be possible after God. Thank you.”