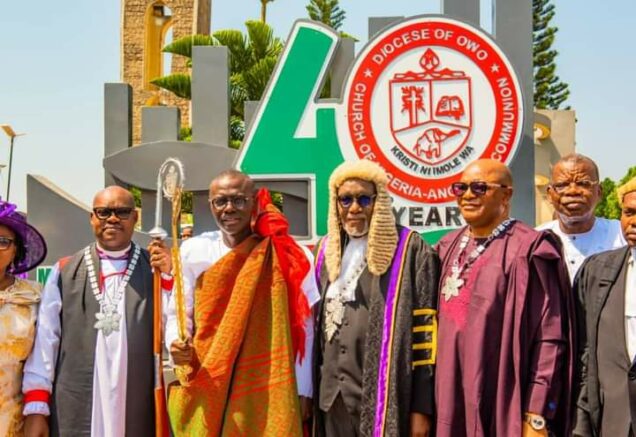 Governors Sanwo-Olu and Akeredolu flanked by the Dean and the Chancellor of the Diocese during the unveiling of the Owo Anglican Diocese 40th anniversary Logo in Owo, Ondo State on Sunday

The governor of Lagos State, Mr Babajide Sanwo-Olu has donated the sum of N50m to the Owo Anglican Diocese.

Sanwo-Olu made the donation at the unveiling of the Owo Anglican Diocese 40th anniversary Logo, banner and programme of events on Sunday.

The unveiling which was held at the Cathedral Church of St. Andrew, Imola street, Owo in Ondo State was performed by the duo of Governor of Ondo State, Arakunrin Oluwarotimi Akeredolu, SAN, and his guest, Babajide Sanwo-Olu.

Sanwo-Olu was the Chairman and Chief Launcher at the event.

The Deputy Governor of Ondo State, Hon. Lucky Orimisan Ayedatiwa, who was represented by Hon. Gboyega Adefarati was the distinguished guest of honour.

Speaking at the event, Akeredolu, who is also the chancellor of the Diocese and Chairman of the Anniversary Planning Committee thanked God for the 40 years’ journey of the Diocese in Owo kingdom.

He said this has brought massive development and growth to the church and the ancient town.

The Ondo State Governor, who sought support from the congregation for the growth of the church, lauded Sanwo-Olu for his tremendous support for the Anglican Communion.

He assured the Lagos state Governor that the church would continue to pray for his re-election.

“We are adding our prayers to your re-election. This is where they pray for my elections and in this Diocese, our prayers are answered”, Akeredolu said.

Sanwo-Olu, while addressing the congregation, appreciated God for the progress of the work of God in the church.

According to him “If you are called, know that it is an honour. We have seen tremendous benefits of being an Anglican. I want to say that we will continue to promote and support God’s work.”

Earlier, In his homily, the Dean, of the Church, Very Rev’d Raphael Agboola who spoke on the theme, “Calling On The Name of The Lord For Salvation” said to come to the cross for total healing and deliverance one must, first of all, come to Jesus.

The cleric saluted the courage of Governor Akeredolu on his various strategies for ensuring maximum security of his people in the state most especially the Southwest region through the creation of a western Nigeria security network codenamed Amotekun.