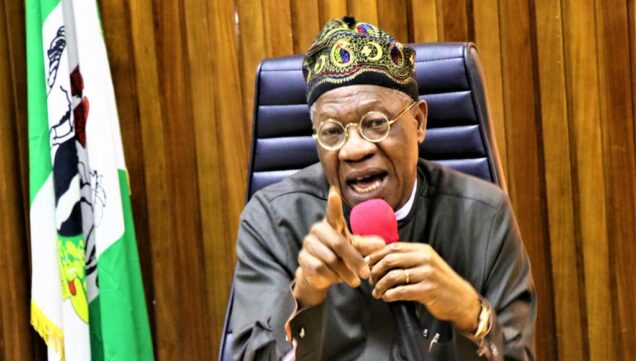 Lai Mohammed, minister of information, took a swipe at Atiku Abubakar, presidential candidate of PDP, for saying APC and President Muhammadu Buhari had not done anything for Nigeria in eight years.

Speaking at the seventh edition of the scorecard series of the President Muhammadu Buhari administration in Abuja on Monday, the minister said if anyone should accuse the current government of not doing anything, it should not be Atiku.

Lai said Atiku cannot see the achievements of the current administration because he lives in Dubai.

After losing the presidential election in 2019, the former vice president was said to have spent most of his time in the Middle East country.

“During his recent campaign in Akure, the former VP was quoted as saying the APC had not done anything for Nigeria in eight years,” Mohammed said.

“What a preposterous statement from somebody who should know. I guess we can excuse His Excellency the former vice-president who, until recently, had fully relocated to Dubai, thus losing touch with Nigeria.

“Before this administration came into office, all the five local government areas in Adamawa’s northern senatorial district were effectively under the control of the Boko Haram terrorists.

“All state institutions, the local government administration, the police, the judiciary, schools, hospitals, and markets had been sacked. Today, not an inch of these local governments in Adamawa, the home state of the former vice-president, is under the control of terrorists.

“All institutions of state have relocated back and are operational. All emirs and chiefs have returned to their palaces.

“You can also see the irony of someone who held the number two position in the country for all of eight years but could not positively impact on his own hometown, state or region now condemning an administration that has made it possible for him to even access his hometown — anytime he flies in from his new hometown of Dubai!”

Mohammed added that Buhari’s administration has had a positive impact on all parts of the country.

“No amount of fallacious soap box rhetorics can change this fact,” the minister said.