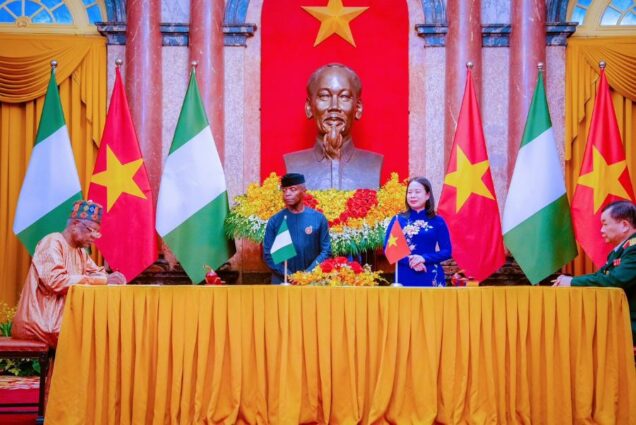 In a determined effort to deepen the long-standing bilateral relations between Nigeria and Vietnam, both countries plan to work together more, particularly in the areas of the digital economy, telecommunications, agriculture and trade, among others, for the mutual benefit of the citizens.

The need for improved collaboration between Nigeria and Vietnam was the focus of the bilateral meeting this morning between Vice Presidents Yemi Osinbajo, SAN, and Madam Võ Th? Ánh Xuân, his Vietnam counterpart, at the Presidential Palace in Hanoi.

The VP is on a three-day official visit to the Southeast Asian nation, the first high-level trip from the Presidency since 2005 when then-President Olusegun Obasanjo visited.

According to Prof. Osinbajo “there are vast opportunities that exist for cooperation and collaboration, especially in the area of digital economy and telecoms, and we look forward to the signing of some of the agreements that we have spoken about – the trade and investment agreements, trade projection agreements, double taxation agreements.

“We look forward to accelerating the process, ensuring that those agreements are signed because they are vital to the collaborations that we will see between our countries in the coming years,” the Vice President noted.

Continuing he noted that “another area I think we might be able to cooperate with you more is in the area of digital economy.”

He noted that despite the COVID-19 disruptions and other occurrences that affected the economy, Nigeria has built, over the past few years, six companies that are engaged in fintech and e-commerce, now described as Unicorns (companies that are valued over a billion dollars each).

“We think that there are opportunities for collaboration between Nigeria and Vietnam, especially in the Digital Economy space. We also have a growing telecoms market, possibly one of the deepest penetrations of telecoms in the developing world. We have close 120 million of our citizens who have put to use telecoms equipment or devices. And also, broadband connectivity is vastly improved. We hope that by 2025, we will have broadband connectivity for all of our over 200 million people,” he noted.

In the area of agriculture, Prof. Osinbajo said, “given the food crisis that the world faces today, and is likely to continue facing even in the coming years, I like to say that the way forward is for our countries to collaborate. For instance, establishing cashew processing plants in Nigeria. What has happened in the past was the export of raw cashew, but at this point, we are concerned about value addition. We will like to see value addition.

“This is an area where Vietnam obviously has significant advantage and experience in the area of cashew processing. If these cashew processing centres are established in Nigeria, we will be able to have an opportunity to add value to raw cashew. In that way, we will draw from the benefits that our countries can derive from the cashew value chain.”

On Vietnam’s quest to establish relations with the Economic Community of West African States (ECOWAS), Prof. Osinbajo assured his Vietnamese counterpart that “we will certainly support Vietnam’s establishment of relations with ECOWAS, we think that it is a very positive thing indeed and we are very mindful of the opportunities that will be created with that kind of collaboration.”

“I just wanted to also add that Nigeria is the largest economy in Africa and this puts us at the centre of the African Continental Free Trade Area (AfCFTA) agreement, which opens up trade in what will become the world’s largest free trade zone.

“We think that Nigeria as the gateway to the rest of Africa is strategic, and we hope that with some of the collaborations that we will be able to sign – specifically trade and industry agreements, Vietnam will see the opportunity in using Nigeria as a staging post for entry into the African Free Trade Zone and for greater collaboration with Africa,” the VP added.

On her part, the Vietnamese Vice President commended Nigeria’s leadership role in the ECOWAS sub-region and in Africa generally, especially in the peaceful resolution of disputes based on international laws, and in the handling of the COVID-19 pandemic.

She expressed confidence in Nigeria’s capability to resolve challenges confronting the continent and sub-region and sought the country’s support for Vietnam’s quest to establish relations with ECOWAS.

Madam Xuan also appreciated Nigeria’s support to Vietnam, especially in supporting her country’s candidates at multilateral forums, including United Nations, among others.

She spoke about the advance of digital transformation in Vietnam, and also stated the country’s commitment to the global energy transition, adding that her country would continue to work with Africa to meet its aspirations in agriculture, clean energy and digital penetration.

One of the highlights of the bilateral meeting between both VPs was the signing of a Memorandum of Understanding on Defence cooperation between Nigeria and Vietnam. While Nigeria’s Ambassador to Vietnam; Ambassador Hassan Adamu Mamani, signed for Nigeria; Vietnamese Deputy Minister of National Defence; Senior Lt. Gen. Hoang Xuan Chien, signed on behalf of his country.

Prof. Osinbajo will later this evening be hosted to a State Banquet by the Vietnamese Vice President, Madam Xuân. Before that, he would also hold a meeting with Prime Minister Ph?m Minh Chính.