Wike: Governors attacking me for revealing refund of derivation money 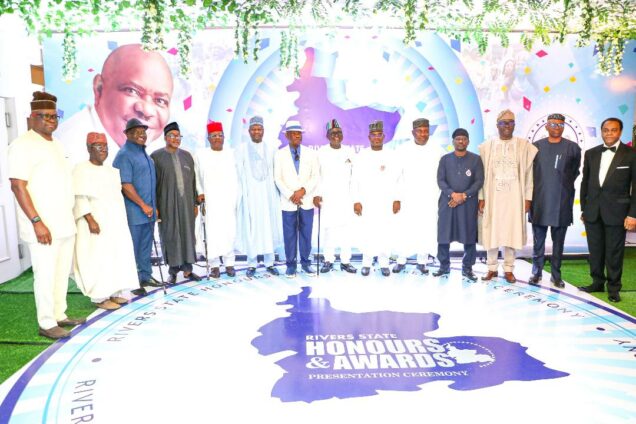 Governor Nyesom Wike has said he is having problems with his colleagues in the Niger Delta because he publicly acknowledged and appreciated President Muhammadu Buhari for refunding derivation funds owed them over the years to their states.

Wike spoke during the conferment of Rivers State honours and awards on 162 Nigerians in Port Harcourt, the state capital late Saturday.

The Governor who said the recipients of the award were honoured for for their inspirational achievements, impactful life and contributions to the progress of Rivers State in particular and the nation in general.

He added that the honours advisory committee had nominated an array of Senior Advocates of Nigeria who have been at the forefront of numerous legal battles of the state with the federal government and other states.

However, Wike said while their professional services, sacrifice and contributions were central to the State government successes in the various courts and the consequential economic benefits Rivers people now enjoy, he he would refrain from naming the lawyers and commending them publicly.

The Governor said this is because similar gesture extended to President Muhammadu Buhari had elicited unwarranted acrimony in the Niger Delta.

He said: “Human beings instead of them to say I appreciate you, they become envious. Because I say Buhari thank you, I am having problems today. That is the country we are in. I am not a fan of Buhari.

“When a man has done well say he has done well in this area. If he has not done well you say so. I have no apologies to anybody. If Buhari did not release the money from 1999 which my party did not even release, I wouldn’t have been doing what I am doing. I say it and I don’t give a damn to anybody. I don’t care.

“I got the money, I am not a fan of Buhari. He has not done well in many areas, but this one he has done well. My party members may not be happy. But they should not be angry, because this one, he did well.

“He gave me money and I used the money to do something for people in Rivers State. This money was there. Nobody paid us. I hear somebody saying that his three kilometre road would do my 15 flyovers. No problem. Do the three kilometres first. Tell Nigerians you are doing three kilometres.”

Among those honoured are eight State governors, nine former governors of other States, lawyers and others who have demonstrated a high level of loyalty to the nation, excellence in public service, commitment to equity, equality and justice in the country and love for the Government and the people of Rivers State.

Governor Wike presented the awards to the awardees during the State Honours and Awards ceremony 2022 which held at the Banquet Hall, Government House, Port Harcourt on Saturday night.

110 distinguished personalities were conferred with the Distinguished Service State of Rivers State (DSSRS), they include wives of the governors of Rivers and Oyo, Hon. Justice Eberechi Suzzette Nyesom-Wike and Mrs. Tamunominini Makinde; Mrs. Onari Donald Duke, Attorney General of the Federation and Minister of Justice, Abubakar Malami, SAN.

Similarly, 33 personalities were presented with the Governor’s Medal of Service (GMS), and two others, Mr. Oruwuru Pere Shedrack and Mrs. Patience Nwogu, with the Rivers State Merit Award (RSMA).

Wike added that the State honours and awards was solely the initiative of former governor, Dr. Peter Odili.

He added that everyone bestowed with an award on Saturday night had distinguished themselves by their good character, personal achievements and positive contributions to society.

The governor stated that the eight governors and former governors honoured by the State were selected from different political parties because of their love for the growth and development of Rivers State.

He said: “I want to say to all of you that, Ortom, Seyi, Ugwuanyi, Ikpeazu, Fintiri (you are not with us, you are with your uncle), in terms of principle, these young men are the people you can trust any day any time.

“Bala Mohammed is a G-1, on his own, one man riot squad. But you can trust him. Fintiri, is my friend, he is our friend. It doesn’t matter the differences. He wants his brother to be president. But we still keep our relationship and that is the way it is supposed to be.

“I fought  Umahi to the last. He never slept. But I don’t know how God is trying to help him. Most of you remember I was the one who fought Oshiomhole. Sorry that I fought you. Until you get information you have never had before, Oshio Baba sorry. But I did it for the interest of my party.”

The governor said he has advised governors of Ebonyi and Kogi States not to waste their money in supporting any governorship candidate in the State, because the Peoples Democratic Party, PDP, will win all elective positions in the 2023 general elections.

Benue State governor, Samuel Ortom, who spoke on behalf of his colleagues, said governor Wike has demonstrated that he is a true patriot and nationalist   by honouring Nigerians from the six geopolitical zones, irrespective of their religious and political persuasion.

“Today, in Nigeria as we match towards 2023, we are not looking at political parties, we are not looking at ethnicity, but we are looking at how we can salvage our country Nigeria, and make it greater than where we are today. I thank you (Wike) for charting this course and I believe that moving forward from here, that all of us who are here tonight will be a catalyst to how we can make Nigeria greater, economically, politically, socially, security wise, we will make it greater.”

Similarly, the Attorney General of the Federation and Minister of Justice, Abubakar Malami, SAN, who spoke on behalf of the awardees, said governor Wike has taken governance to the next level.

“You have indeed demonstrated what it takes to be accommodating, what it takes to be a bridge builder, a builder of bridges across the Niger. You have established a bridge, we are happy crossing over to come around for the purpose of identifying with you in the expression of excellence attributed to the service of the nation, Rivers state.”

Chairman of the Rivers State Honours advisory committee, Chief Ferdinand Alabraba said the law empowers the governor to confer honour on those who have contributed to the growth and development of the State.