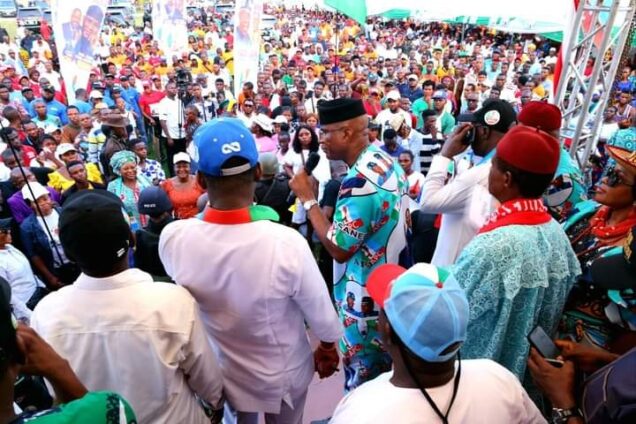 Deputy President of the Senate Ovie Omo-Agege campaigning for Bola Tinubu, other APC candidates in 2023 general elections in Delta State.

Deputy President of the Senate, Senator Ovie Omo-Agege has, campaign stop after campaign stop, canvassed votes for the Presidential Candidate of the All Progressives Party, APC, Asiwaju Bola Ahmed Tinubu, and all candidates of the party contesting the 2023 general elections in Delta State.

The campaign train had stops at Abbi, Kwale and Utagba-Uno, all in Ndokwa West local government area.

In making a case for Tinubu, Senator Omo-Agege said the APC presidential candidate is a son-in-law of Delta State, since his wife, Senator Oluremi Tinubu, is a proud daughter of Itsekiri.

He said Delta state stood to benefit tremendously from a Tinubu presidency, both in terms of infrastructure and human capital development.

He urged the people of Ndokwa West to deny Governor Ifeanyi Okowa a third term by proxy, because a vote for PDP’s Sheriff Oborevwori is a vote for what he described as “Okowa’s misgovernance”.

Senator Omo-Agege lamented that the PDP was leaving no legacy project in the whole of Ndokwa nation, even as an oil producing area.

“But don’t worry, in the next two months we will tell Okowa and his PDP bye bye with our votes. We need a new leadership that will address the issues of Ndokwa nation.

“For the past seven and half years there is no sign of prosperity in Ndokwaland and yet the outgoing governor, Okowa, was elected to power on the platform and guise of protecting the interest of the Ndokwa nation.

“All the wickedness of Okowa and PDP will be recompensed during the election and I urge you to reject PDP and it’s presidential candidate, Atiku Abubakar. You must also reject Oborevwori as governor. Vote Asiwaju Bola Ahmed Tinubu as President, myself Ovie Omo-Agege as governor.”

He made a strong case for Senator Peter Nwaoboshi to be reelected to the senate, saying when elected, Nwaoboshi would be a ranking senator who would be qualified to become the President of the Senate in 2023.

Cheering crowds welcomed Senator Omo-Agege and the campaign train to the rally grounds, where over 100 former members of PDP led by Tiny Okpu decamped to the APC and were received by the party State Chairman, Elder Omeni Sobotie.

Elder Sobotie said the decampees were in biblical parlance “once blind but now can see.”

He said for every struggle there is a leader, “and today, we have a Joshua who will take us to the Promised Land in the person of Senator Ovie Omo-Agege.”