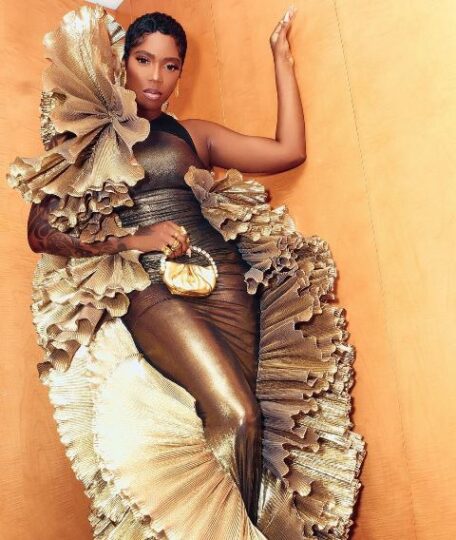 Nigerian singer, Tiwa Savage stole the show last night at the British Fashion Award as she was decked in gorgeous outfit that kept tongues wagging.
The 42-year-old singer was the cynosure of all eyes as she was spotted on the red carpet with all eyes fixated on her.

Savage posted photos and video of the event on her Instagram page and wrote:  “About last night, British Fashion Awards #BFA”

Born in 1980, Savage is a Nigerian singer-songwriter and performing artist. she relocated to London at the age of 11 for her secondary education.
Watch video below:
Five years later, she began her music career doing backup vocals for artists such as George Michael and Mary J. Blige. After participating in the UK edition of The X Factor and graduating from Berklee College of Music, Savage signed a publishing deal with Sony/ATV Music Publishing in 2009.

Inspired by the growth of the Nigerian music industry, Savage moved back to Nigeria and signed with Mavin Records in 2012. She made an appearance on the label’s 2012 compilation album Solar Plexus.