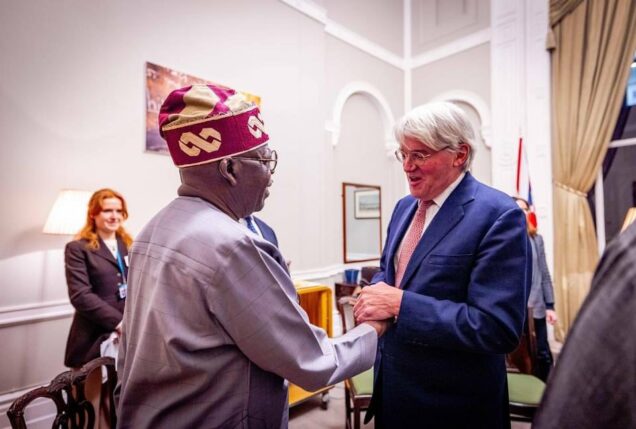 Tinubu and Mitchell before their closed-door meeting in London.

The meeting was held after Tinubu delivered his speech at the Chatham House and his interview with BBC.

At the meeting with the presidential candidate, were the Speaker, House of Representatives, Femi Gbajabiamila; former Governor of Ekiti State, Dr. Kayode Fayemi and the Jigawa State Governor, Mohammed Badaru.

Photos of the meeting were posted by Adamu Garba, a chieftain of the All Progressives Congress (APC) on his Twitter handle.

“In his usual Team Spirit, Asiwaju Bola Ahmed Tinubu met privately with the British Minister for Africa, Foreign and Commonwealth Development Office. Fully kitted and ready with his team. Tinubu is the only kind of leader we can trust with Nigerian Presidential office come 2023,” he tweeted.

The APC’s presidential hopeful had at Chatham House unveiled his blueprint for Nigeria and also had an interview with the BBC.