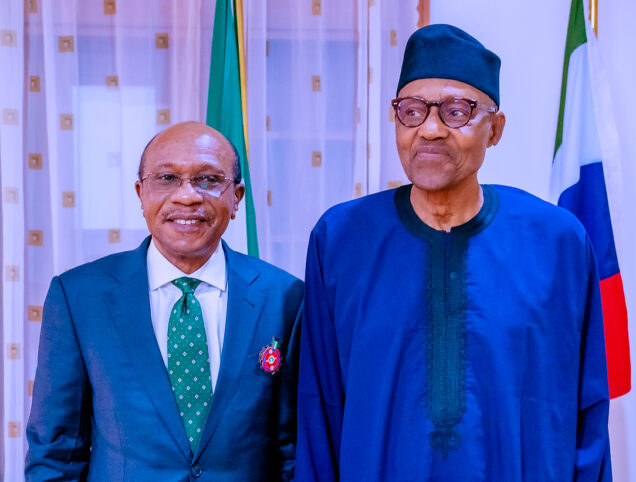 Godwin Emefiele, the Governor of Central Bank of Nigeria, CBN has insisted that the apex bank will not dump its new cash withdrawal limit policy slated for take-off on January 9, 2023.

He spoke against the demand by the House of Representatives that the policy should be halted.

But while speaking to journalists after meeting with President Muhammadu Buhari in Daura, Katsina State, Emefiele said the apex bank with not dump the policy.

The CBN Governor also said he has the backing of President Muhammadu Buhari for the policy.

According to Emefiele, Buhari “was very very happy and said we should carry on our work, no need to fear, no need to bother about anybody”.

The CBN Governor insisted that the the policy was not targeted at any particular person, but aimed at developing the economy.

But he conceded that some details of the policy may be reviewed after it came into operation.

The House of Representatives had resolved that Emefiele should appear before it next Thursday to come and explain the new policy.

This followed a motion of matter of urgent public importance moved by Aliyu Magaji (APC Jigawa) on Thursday during plenary.

Magaji had complained that the policy will affect small businesses which depend on cash for transactions with negative impact on the economy at large.

“Although the Central Bank of Nigeria has the right to issue monetary policies on the Nigerian economy to be able to guide and direct the economy to the right part of recovery and growth, however, the new policy rolled out by the Central Bank of Nigeria (CBN) will definitely have a negative impact on the already dwindling economy, and further weakens the value of the Naira as Nigerians may resolve to use dollars and other currencies as a means of trading and thus further devalue Naira and weakens the economy.

“The issue affects everyone, most of our people are in rural areas and everything is being done in Naira and cash. And somebody will wake up and make a policy that will start tomorrow, no consultation,” he stated.

But responding to questions from journalists after his meeting with the President, Emefiele said: “Well, the Senate of the Federal Republic is National Assembly, they are legislative arm of the government and from time to time we brief them about what is happening and about our policies and I’m aware that they have asked for some briefings and we will brief them but I think it’s important for me to say that the cashless policy started in 2012.

“Almost three to four occasions we have had to step down the policy because we felt that there is a need for us to prepare ourselves and deepen our payment system infrastructure in Nigeria. Between 2012 and now 2022, almost about 10 years, we believe that a lot of electronic channels have been put in place that will aid people in conducting banking and financial service transactions in Nigeria.

“We heard about people talk about some of the people in the rural areas and the truth is that even online banking, as I was coming out to Daura, I saw a kiosk that has super agent today. It’s because of the way we felt that there was a need for us to deepen the payment system infrastructure.

“Having 1.4 million of them is as good as having 1.4 million banking points where people can conduct services and we think, Nigeria as a big country, the biggest economy in Africa, that we need to leapfrog into the cashless economy.”

The CBN had in a memo issued on Tuesday directed all banks and other financial institutions to ensure that over-the-counter cash withdrawals by individuals and corporate entities do not exceed N100, 000 and N500, 000, respectively, per week.

The apex bank also directed that only N200 and lower denominations should be loaded into banks’ ATM machines.