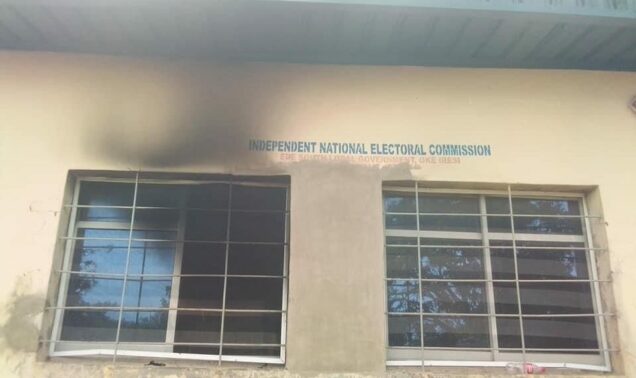 Independent National Electoral Commission (INEC) says the recent attack on its facilities in Osun did not affect any of its sensitive materials, especially permanent voter cards (PVCs).

The Resident Electoral Commissioner (REC) in the state, Dr. Mutiu Agboke, at the commission’s maiden stakeholders meeting on Thursday in Osogbo.

Some suspected arsonists had, on Nov. 10, set the commission’s office in the Ede-South Local Government Area of the state on fire.

The prompt intervention of men of the fire service department in the state had prevented the incident from spreading from the conference hall, where it started to other buildings.

Agboke explained that although some parts of the INEC office were destroyed by the inferno in the Ede-South council area, no sensitive material, particularly the PVCs, was affected.

“A week after I resumed in the Osogbo office, our facility in Ede-South local government was attacked with fire.

“With the swift intervention of security agents and the locals, the fire was put out; it only affected the conference room,” he said.

The REC expressed appreciation to the police and other security agencies in the state for their swift response during the incident.

“We shall expect more synergy in this regard, for better outing in the 2023 general elections,” he said.

Speaking on BVAS machines, Agboke said that no electorate would be allowed to cast his/her vote without being accredited through the machine.

He said that INEC had decided to make PVC collection seamless and easy for the electorate.

Agboke called for synergy among stakeholders, especially on election management strategy, to get the desired results in 2023.

“I want to call on all the stakeholders in electioneering activities in Osun to support the commission to deliver credible elections in 2023.

“I am here to carry out my duties in the state without fear or favour. No one should look for any INEC staffer for any support or help.

“All the stakeholders must guard their corners very well because the success of the coming elections is our responsibility,” the REC said.

Also speaking, the Police Commissioner in Osun, Mr. Sunday Faleye, said that electoral security management was not new to the police.

Sunday stated that the police had already begun its pre-election security management strategy in order to ensure the success of the 2023 general elections.

He assured that the police and other security agencies would synergize to ensure peaceful conduct of the elections.

Earlier, the Chairman of the Inter-Party Advisory Council (IPAC) in the state, Mr. Wale Adebayo, commended INEC for organizing the stakeholders’ meeting to enlighten the participants on what was expected during the elections.

Adebayo called for synergy among stakeholders as the only panacea for free, fair, and credible elections in the country.

The event was attended by heads of security agencies in the state, representatives of political parties, media organizations, civil society organizations, and other key stakeholders.