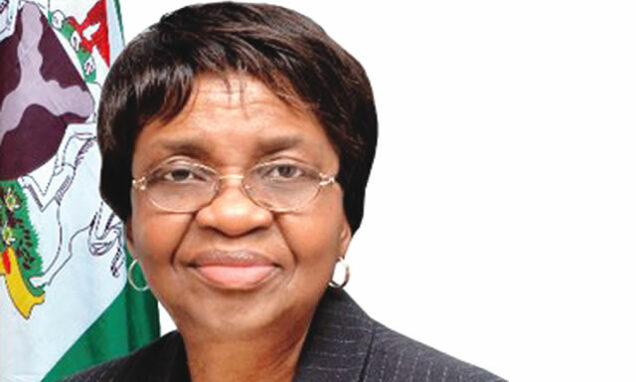 She has been re-appointed for a second term of five years.

Adeyeye stopped by briefly at the corporate headquarters in Abuja to meet with some Directors on Friday.

The agency wrote on its twitter handle: “Prof. Mojisola Christianah Adeyeye has been reappointed as the

@DGatNAFDAC  for the second and final tenure of five years. She stopped by briefly at the corporate headquarters in Abuja to meet with some Directors.“

Adeyeye, a Nigerian pharmacist and professor was first appointed the Director-General of NAFDAC on 3 November 2017 by the President of The Federal Republic of Nigeria, Muhammadu Buhari.

Before her appointment as NAFDAC boss, she was the founding Chair of Biopharmaceutical Sciences and a Professor of Pharmaceutics, Manufacturing Science and Drug Product Evaluation at the College of Pharmacy, Roosevelt University in Schaumburg, Illinois, where she spent 7 years.

She was also a Professor of Pharmaceutics and Manufacturing for 21 years at Duquesne University in Pittsburgh, Pennsylvania, USA. She is Senior Fulbright Scholar and Specialist and 2008 American Association of Pharmaceutical Scientists Fellow (the first African woman fellow).

She is also a Fellow of the Nigerian Academy of Science and Nigeria Academy of Pharmacy. Her research interests are in the areas of pre-formulation, early phase development of solid, semisolid and liquid dosage forms, and IND-based and intellectual property-driven late phase drug product development.

She is the founder and President of Elim Pediatric Pharmaceuticals Rolling Meadows, Illinois. Through Duquesne University, she was able to develop an anti-retroviral (HIV/AIDS) pediatric fixed-dose combination and received intellectual property on the formulations in the UK and South Africa.