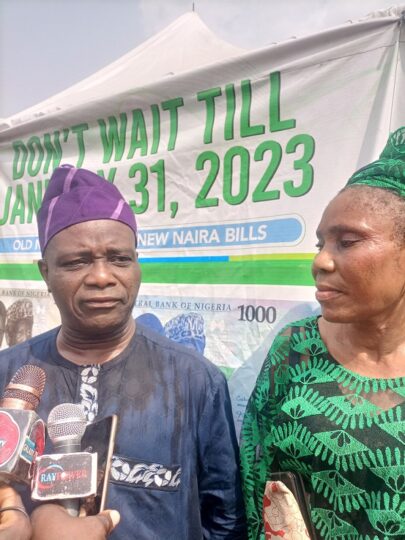 The Central Bank of Nigeria, CBN, has said most of the banks in Ogun State are already flooded with the new notes ahead of the 31 January deadline for withdrawal of old notes from circulation.

The CBN also said its monitoring of activities of banks in the state for the past two weeks revealed that commercial banks and their Automated Teller Machines (ATMs) were largely dispensing the new notes.

The CBN Officials said this after they monitored branches of banks in the Ewekoro, Ifo, Sango Local Government and Ijebu-Ode Sagamu to ensure compliance with the directive of the apex bank that they should be dispensing the new notes to customers.

The Branch Controller of CBN in Abeokuta, Alh Wahab Lanre Oseni who led officials of the apex bank to monitor the money lodgment and withdrawal in the Abeokuta metropolis, confirmed that new Naira notes had now flooded the banks.

During a sensitization programme by the CBN at the popular Lafenwa Market in Abeokuta on the new currency, the traders had express fear that a category of the population of the state, particularly the aged do not have a bank account, but only save their money at home, hence, will be deprived the opportunity of changing their old money to the new ones

But the CBN Controller, while responding to questions from the market women and men noted that commercial banks will be available to open free accounts for the concerned persons which will require no document but only their names and address.

The Branch Manager stressed that the apex bank’s governor, Godwin Emefiele had supplied sufficient cash to all commercial banks across the nation for circulation of the new currency.
He advised the residents to without delay visit their various banks to change the old notes before the deadline.

He debunked speculation that the CBN will consider extending the date of the deadline for the authenticity of the old naira notes.

Oseni equally reiterated CBN’s threat to sanction any banks who still release the old currencies after the January 31st deadline.

His words “The governor and his team have supplied more cash to branches of CBN and from yesterday, sufficient cash is now available in all the commercial banks so that they will be penalized wherever they use old notes. Any bank that is found still bringing it out will be penalized.

“One of the reasons why the naira was redesigned is the poor handling of the notes. Also, what it cost CBN and the federal government to mint notes cost a lot. For example, the amount it costs to print N 1000 is higher than that amount, the same thing with others and that will not be a good thing for an economy.”

He said “Part of the reason why we spend a lot on that is poor handling of the cash itself by the public. That is why we won’t stop sensitisation until Nigerians imbibe a better way of handling money, so the two major reasons are those faking the notes and poor handling and as well as higher cost causing CBN to change the notes.

“Even when people imbibe the usage of less cash, we are now advising the public to see the opportunity of e- channels of payment. We have told the people to always save whatever the money they are collecting in the bank.

“We have also made them understand that no bank will charge anything on any amount they save as on January 31st it is from January one that there will be charges,” he added.

Also, while speaking with market women at Awolowo market in Sagamu on the need to accept the old notes till 6-7pm of January 31st 2023, he hinted that enough new notes have been supplied in Ogun state and in other states.

He also urged consumers to report any bank that remove excess charges or money from their account as no bank should remove any charges from any account for deposit of any amount till January 31st, 2023.

“The email of consumer protection department has been given to them. If they don’t want to go through internet, whoever that feel cheated can physically come to CBN Abeokuta branch; they are free to enter. We always make sure that we sanction the bank that is affected except that bank has reasonable explanation against the person who actually launched the complaint.

“The findings were that improvement has commenced. One or two banks we saw old notes, they have been contacted and the sanction has been carried out upon such a bank. We have about 95% compliance now in the area we have gone to.

“We monitored all the banks and ATMs in the state and ensured that they dispensed the new notes.

“This is in line with CBN efforts to ensure that the new notes go round and reach the citizens,” he said.

He, however, gives security tips to look out for in the need naira notes to know difference between fake and original.

“We told our people that they should check the gold, that triangular golden feature is one. When you touch that for one or two/three minutes, that one will not bleach. But the one that you even say is bleaching, that bleaching you saw is not bleach. It is security feature especially the #1000 when put tissue paper and you see it looking like blue, that is the security of that one.

“The other one, where you don’t find blue when you use tissue paper is fake. They are so many other security features that we cannot use our naked eyes to see.

“We monitored all the banks and ATMs in the state and ensured that they dispensed the new notes.

“This is in line with CBN efforts to ensure that the new notes go round and reach the citizens,” he said.