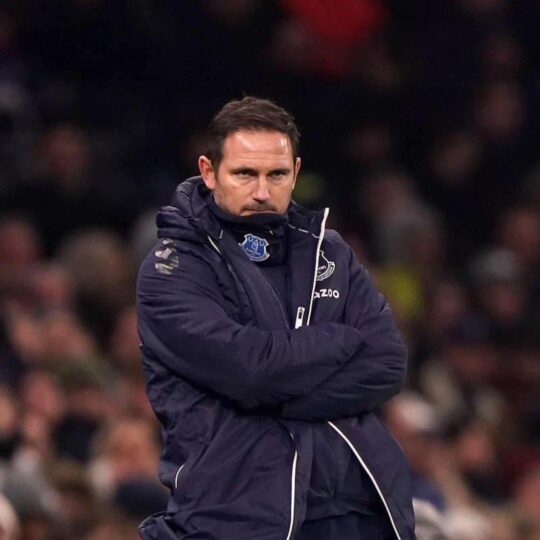 Everton are expected to announce the sack of Frank Lampard any moment from now.

The sack became inevitable after a run of poor form which has left the team joint-bottom of the Premier League.

Lampard arrived at Goodison Park in January 2022 and although he helped the club avoid the drop last season, he has picked up just 15 points from 20 games and just three wins this term – the worst victory record in the division.

Everton has now gone 10 games without a win in all competition and is currently 19th in the table, with only Southampton below them on goal difference.

The club have also been eliminated from both domestic cup competitions in that time.

Sky Sports News Vinny O’Connor who is monitoring the situation at Everton said: “There is an inevitability about it. We are hearing that at some point a decision will be made and the expectation is it will be announced that Frank Lampard will be leaving his post as Everton manager.

“It will be less than a year since he took over – he actually was appointed as manager on January 31 last year. And it’s been a year and seven days since Rafa Benitez was removed from his position at Everton.

“You can see why – Everton are in this position once again. They are second from bottom in the Premier League, only above Southampton on goal difference. They have lost to Southampton and Wolves in recent weeks and if you saw the performance against West Ham, there were defensive mistakes and they are looking a bit toothless in attack once again. And that’s all added up to Everton’s problems and why there’s a fear once again that they are in a relegation battle.

“You can see the atmosphere building around the club so it’s a big decision for the Everton board. It’s to get a bit of unity back around this place once again because there’s a disconnect between the fans – who feel that they have been scapegoated in respect to some of the problems the club faces when they are holding members of the board accountable for the state the club finds itself in.

“Certainly they are holding the board more accountable than Frank Lampard at the moment. So we’re expecting change at Everton once again at a crucial point in the season. Their next games are against Arsenal on February 4, then it’s the Merseyside derby, before back-to-back home games against Leeds and Aston Villa that could go a long way to affecting Everton’s fate this season.”

Speaking to Sky Sports News after their defeat to West Ham, Everton owner Moshiri said “it’s not my decision” when asked if Lampard’s time was up, while the manager insisted he remained focused on the challenge at hand in his final post-match interview.

“It’s my job to work and focus and keep my head down,” Lampard told Sky Sports. “I’ve got absolute confidence in how I want to coach. And if they are difficult conditions at the minute, for a lot of different reasons that I’m very aware of, then that’s it.

“I just have to do my job and it’s not for me to make too many diversions around it rather than talk about what I can affect and that’s the players, trying to get the right results.”