This is what happened today when Tinubu stormed Ogun for campaign (Video, photos) 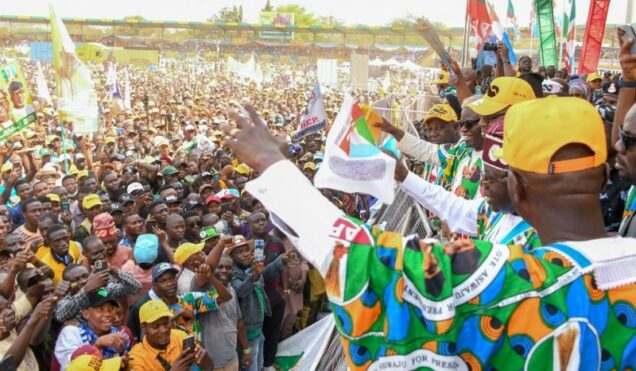 Tinubu addressing the huge crowd in Abeokuta on Wednesday.

Many roads were shut, gridlock was massive in Abeokuta as all roads led to the stadium for the grandeur rally.

The stadium was filled to capacity as early as in the morning as thousands of APC supporters stormed the stadium to drum support for Tinubu.

Many supporters were armed with banners and placards bearing the photos and inscription of Tinubu. They were all chanting in unison the name of Tinubu.

The APC’s presidential candidate made a grand entry into the stadium. Everywhere erupted in rapturous joy.

Despite Ogun bring the home of former President, Olusegun Obasanjo and who recently called on youths to vote for Peter Obi, the huge crowd present at the stadium simply put him to shame, showing that no one is ready to obey his voice.