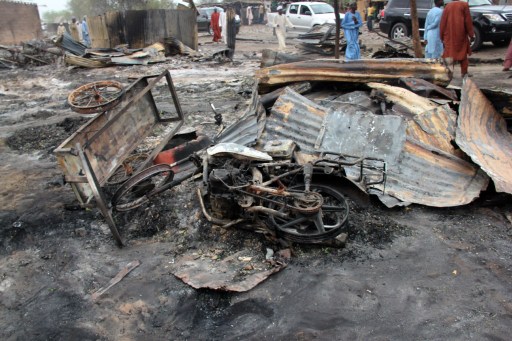 File photo:A burnt motorcyle lies in a street of the remote northeast town of Baga on April 21, 2013 .AFP

The gunbattle between security forces and Boko Haram insurgents in Nigeria a week ago in Baga killed 228 people, Senator Maina Maaji Lawan has said.

His account of the death toll is six times higher than the Nigerian military’s estimate, and more than the figure of 185 given by the local chief and the 187 initially given by the Red Cross.

“I personally visited three graveyards in Baga and counted 228 graves where victims had been buried,” said Senator Lawan, at a press conference in Maiduguri.

Lawan represents the area of Borno state where the attack, said to have been between Boko Haram and a multi-national force from Nigeria, Niger and Chad took place.

Lawan told reporters that 4,000 homes were also destroyed and without significant relief materials there could be a humanitarian disaster.

There have been conflicting death tolls from the April 19 operation carried out by joint forces from Nigeria, Chad and Niger against Boko Haram insurgents in the remote northeastern town of Baga, in Borno State.

The Red Cross is investigating a report by locals that 187 people died, including many civilians, but defense spokesman Chris Olukolade said only 37 were killed, a position reaffirmed Saturday, when the Defence Headquarters denied s story that
some 15 soldiers have been arrested in connection with Baga massacre.

“This is indeed false in its entirety”, said a statement by Olukolade.

`At no point did the DHQ or any of the services of the Nigerian Armed Forces order the arrest of any of its soldiers in connection with the incident in Baga. The DHQ reaffirms its stand that all lives are precious in the conduct of all operations.

“The loss of human lives should not be taken with levity or unnecessary sensationalism as some interest groups appear bent on doing.

“The military has therefore refrained from joining issues on figures being so vociferously presented and believed in certain quarters even when the reports on the ground are indicating otherwise,’’ it said.

According to the statement, the efforts by some persons and groups to attribute the killings in Baga to the Multi-National Joint Task Force are, however, assuming very unfair and dangerous dimensions.

“It is surprising that the atrocities of Boko Haram terrorists are being desperately blamed on the troops even without investigations by those promoting the allegations locally and internationally.

“This tendency is clearly in line with the orchestrated effort by a vested interest, using the press, to whip up public resentment against the necessary military operations in defence and security of the nation.

“The series of false claims on the incident in Baga should, however, not be forced down the throat of well-meaning people of Nigeria and beyond.

“The DHQ, once more, urges the press to desist from playing into the hands of those who do not mean well for the country in times like this,’’ it added.

The military had created suspicions about its own version when it barred aid agencies from entering Baga for several days after the attack. The Red Cross and some other agencies have since been given access but none has issued a definitive death toll.

President Goodluck Jonathan has opened an investigation into the siege, including the actions taken by the military.

.With Reports by Reuters and News Agency of Nigeria.