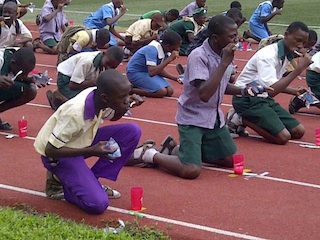 Kazeem Ugbodaga
Nigeria’s Lagos State has shattered the Guinness Book of World in tooth brushing previously set by India by getting 300,000 students from 600 public secondary schools in Lagos, Southwest Nigeria to brush their teeth simultaneously at different locations.

In 2007, 117,000 students in India brushed their teeth simultaneously for one minute at different locations, thus entering the Guinness Book of World Record, a record that has lasted for six years.

In Lagos the students achieved this feat by brushing their teeth simultaneously for one minute across 326 multiple locations across Lagos State, with the main location being Teslim Balogun Stadium where thousands of students undertook the exercise.

At exactly, 2.15 pm on Thursday, Project Head of HEIT Solutions, Dr. Lawal Bakare, convener of the Tooth brushing Challenge Project, signaled on the students to begin brushing their teeth and called on them to stop at 2.16 pm.

Unilever Nigeria Limited, one of the sponsors of the event provided the tooth brush and toothpaste used in the challenge, while the Lagos State Government partnered with HEIT Solution to undertake the tooth brushing challenge.

Special Adviser to the Lagos State Governor on Public Health, Dr. Yewande Adeshina commended the students for being part of the feat, describing it as historic for their generation, saying that there was need for them to pay more attention to their oral health, as doing so, would impact on their general well being and ensure they lived long.

According to her, the government explored the tooth brushing challenge as a means to build positive oral health behaviours among young people and use them to influence change in older people, while restating government`s commitment to the provision of affordable dental care, as a good number of health facilities had been equipped to demonstrate that commitment.

He said the new record is subject to verification by officials of the Guinness Book of Records after the report from all the locations is collated, upon which certificate will be presented as the official World Record holders.

Convener of the tooth brushing challenge, Bakare explained that school children were chosen for the project because they were still at a stage when they could embrace new behaviours and attitudes.

“You are the essence of this challenge, we gathered here because we believe that you are supposed to have better oral health. Most of you do not know that when you don’t have your teeth, you would not grow as you ought to, so we are trying to make you remember three things; brush twice a day, brush using the appropriate technique and visit the dentist regularly,’ he stated.

According to the Brand Manager, Unilever (Close Up), Mr. Kester Abiola, less than 50 percent of Nigerians brush their teeth twice a day as that was not good enough, adding that 17 percent of the population had toothaches due to improper and irregular tooth brushing, which he said, could be corrected with good oral hygiene.

“Unilever has supported oral health in Nigeria for over eight decades; its Close-Up brand was produced to meet the oral health needs of Nigerians. Unilever is 90 years old and over the years, we have continued to come up with products to ensure oral health of citizens, especially children. Close Up tooth paste is a family brand anytime any day and we are proud to be part of history making,” he said.