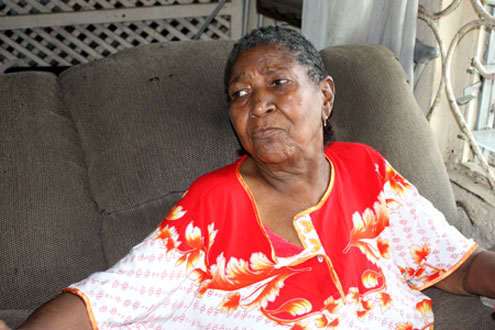 Officials of the Lagos State Government have arrested an 84-year old woman at Lekki area of Lagos State, Nigeria for allegedly selling babies while her orphanage home that served as a baby factory was shut.

Mrs. Theresa Marques, the suspect, who recently suffered a stroke was arrested and brought to the Lagos State Government Secretariat, Alausa, Ikeja, yesterday in the Lagos Ambulance Service bus to keep her in healthy condition.

Officials of the Social Department, Ministry of Youth, Sports and Social Development had first stormed the orphanage home at Block 380, Jakande Estate, Lekki on Tuesday and rescued two new born babies, two boys and arrested some young women found at the orphanage.

She was said to have been granted license by the state government some years ago to operate an orphanage under the name Ife-Oluwa Orphanage Home but 84-year old Marques now runs the orphanage along with an unapproved Maternity centre where babies are being delivered. She also has a school there.

Following the development, the state government had revoked the license of the orphanage and shut it down after rescuing some children from the Home.

Officials of the state government claimed that they got a tip off from some members of public that the woman allegedly collected money from people before handing over babies to them in the guise of adoption.

The act contradicts governmentâ€™s law which prohibits that money should be collected before giving out children for adoption. Also, the exchange of the babies is without governmentâ€™s notice, an act that is criminal under the law.

Senior Special Assistant to the Governor on Youth and Social Development, Mrs Busola Ogunkoya, who led the team said government was informed that the old woman was making money through giving out of babies to intended adopters without governmentâ€™s notice.

Unconfirmed reports had it that the woman allegedly harboured young men and women who engaged in sex in order to produce children for her orphanage which are then given out. Marques, however denied that she collected money from intended adopters before handing the children over to them but confessed that she asked them for donations which were in most cases around N100,000, N200,000, among others, adding that this was always done after the process of adoption had been completed.

She admitted that some young girls with pregnancy come to her for help since they had nowhere to go, saying that in such cases, she used to rent apartment for them and pay for their ante-natal services and their delivery.

According to her, it is such babies left in her care that she gives out to interested adopters without governmentâ€™s consent. Two of the new born babies discovered in the home were born last Sunday but their mothers were nowhere to be found. Marques said their mothers had gone to court to swear to an afidavit that they did not want the children and after two days, the women had not still come back from the court.

A medical doctor was also arrested at the Maternity belonging to the octogenarian and had been detained at the taskforce office Alausa, Ikeja.

He was caught in a private room in the hospital with a young lady half naked, while himself was scantily dressed. Children handed over to the old woman were allegedly sold to those in need of children without following governmentâ€™s laid down procedure.

Special Adviser to the Governor on Youth, Sports and Social Development, Dr. Dolapo Badru told P.M.NEWS that lots of illegality were being perpetrated by some people in the state under the guise that they were operating orphanage homes.

â€œThey are giving us bad name. As people operating orphanages, they are seen as part of government. They make things difficult for people looking for children in order to make them cough out some money. We have been on their trail for long.â€™

â€œTwo different babies with two different mothers were rescued. We will get to the root of this matter,â€ he stated.