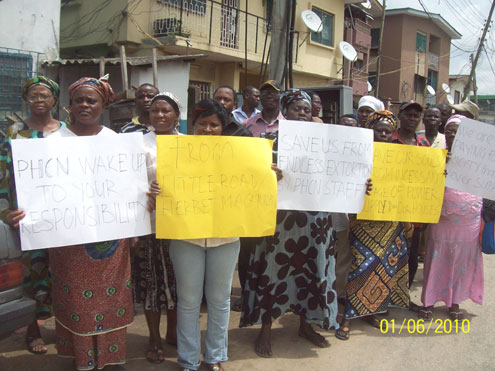 Following epileptic power supply to their community, the residents of Southern Little Road, Sawyer, part of Herbert Macaulay and Akintoye streets in Yaba Local Council Development Area of Lagos state, Nigeria, yesterday stormed the premises of Power Holding Company of Nigeria (PHCN), Iwaya/Onike Undertaking and Ijora District, Lagos offices, to submit their protest letter against what they called intimidation and harassment of the power companyâ€™s officials.

The residents in the letter, stated that for more than a year now, they have been subjected to what they called â€˜period of blackout,â€™ while the neighbouring communities enjoy regular power supply.

This, they said, had dealt severe punishment and psychological torture on them, as they pay heavy amounts on their health as a result of heat.

They added that the situation has also paralysed both social and economic activities in the area as everybody relies on generating sets as means of alternative power supply.

The residents informed Lagos Bulletin, that times without number, they contributed money either to buy cable for the transformer or carry out one maintenance or the other, but still, they have been kept in perpetual darkness, the situation which they want PHCN to rectify.

On their experience, they said â€œenquiry from PHCN, Onike/Iwaya Undertaking by elders and concerned residents always elicit diverse excuses from the management and staff of the power company as the responses often echoed by them are our transformer is bad, short of oil or the cable had been stolen.

â€œWe have been subjected to the same story as been the cause of our being plunged into perpetual darkness.â€

The residents, who were represented by Chief Tunde Coker, Mr. K. Adeyemo, Mr. Felix Isibor and others, however, appealed to the General Manager, PHCN, Eko Distribution Zone, to use his good offices and put an end to the punishment being meted on them by Onike/Iwaya Undertaking station, promising to continue to behave with proper decorum as peace loving and responsible citizens.

At Onike/Iwaya PHCN office, the residents were left unattended to by the officials, but a copy of their â€˜Save Our Soulâ€™ letter was submitted to one of the workers before proceeding to Ijora District office for the same purpose.

Engineer F. L. Okorobo-Ibe, Business Manager, Ijora District, who received the letter on behalf of the General Manager, promised the aggrieved residents of channelling their complaint to the appropriate quarters as well as attending to their complaint as soon as the district is supplied with materials.

Okorobo-Ibe also used the forum to inform Lagos State residents to always channel their problems through the appropriate quarters instead of going through the back door. This, he said, would assist them to attend to their problems as soon as possible.

He thanked the representatives of the aggrieved Yaba residents for the peaceful step taken to lay their complaint.