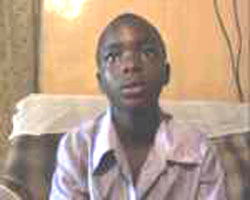 Narrating how he was kidnapped to P.M.News at the Kaduna Idoma Chiefâ€™s palace, Ungwar Television ,where he was taken to for safety after he was found, Oche explained that he and two other friends went to swim at a stream at Angwana Gwari, Kawo, which is not too far from their houses, when two hefty men and a woman suddenly appeared at the bank of the stream.

According to the boy, identified as an Idoma by tribe, he was getting undressed to join his two other friends in the stream when a man grabbed him from the neck and that was the last thing he could recall.

On where he was taken to after being kidnapped, Oche said: â€œI only heard them call the place Zuma Rock. It is like a market where human beings are sold.â€

He told P.M.News how his ability to swim helped him to escape from the den of the kidnappers.

â€œI deceived one of the attendents at the rock place that I wanted to go and take my bath at a nearby stream and he allowed me and that was how I managed to escape from the place.

â€œAt the time of filing this report, his parents were yet to come to the palace of the Idoma Chief in Kaduna where the boy was first taken to.

However, he has been transferred to Sabo-Tasha Divisional Police Station .