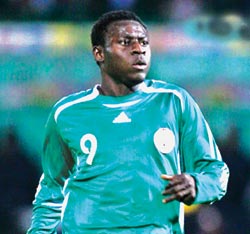 Martins, who was introduced as a second half substitute alongside Osaze Odemwingie and Uche Kalu in the tensioned soaked encounter with the Lionel Messi-inspired Argentina, frowned over what he described as poor teamwork during Nigeriaâ€™s first match at South Africa 2010.

Speaking with P.M.Sports at the Mixed Zone of Ellis Park Stadium, Martins expressedÂ  disappointment over the narrow loss to the Argentines, saying the team failed to get at least a draw in the match because some of the players were selfish during the match.

â€œWe played well against Argentina but didnâ€™t really play as one in the attack. What I observed is that the players, especially in the attack were trying to score. We had the chances to score but some of us preferred to play individual game, that denied us an opportunity to equalise or probably come back from the lone goal to beat Argentina. Iâ€™m really sad that we lost such a big match,â€ Martins lamented.

Martins was free and in a better position to equalise the deficit goal against Argentina when Osaze failed to give him a pass during Saturdayâ€™s opening game.

Osaze eventually wasted the chance, which caused an outburst with Martins. The Wolfsburg of Germany striker said the Eagles are now in a must win situation when they confront Greece in Thursdayâ€™s second group match.

Martins said: â€œWe have no choice than to brace up to the occasion, we must play together to ensure we beat Greece. I think the South Koreans will also prove difficult but we have no choice but to play and win the remaining two games because we didnâ€™t get any point against Argentinaâ€.