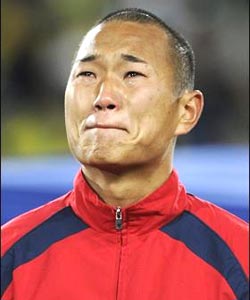 Tae-Se Jong was crying as the national anthems rang out around the Ellis Park stadium in Joâ€™burg.

And there was more sobbing after a game that saw the minnows keep the five-times world champions heroically at bay for 55 minutes.

â€œI think we gained a lot of experience and, for the remaining two games, we have gained confidence.

â€œThe Brazilian team is very strong and, although we were unable to win the game, I believe our players fought very well.â€

Samba strike star Robinho admitted: â€œIt wasnâ€™t our best match but at least we got the win, Thatâ€™s what matters now.â€

Maicon broke North Korean hearts with the opener, while Elano made the game safe with a second after 72 minutes.

But there was still a twist as Yun-Nam Ji kept his head to shock Brazil with a superb goal a minute from time.

Maicon admitted his career flashed before him when he scored.

He said: â€œI thought of everything which I went through to get to this moment. It was my first World Cup match, I didnâ€™t cry but I was very happy with the goal I scored.

â€œEveryone has been complaining about this World Cup ball but I canâ€™t have any complaints.

â€œIt really did me a giant favour the way it swerved at the last minute. It made it very difficult for the keeper.â€

Brazil coach Dunga said: â€œThe start is the most difficult match.Â  You have a long wait for this and the anxiety builds up. Iâ€™m satisfied with the win but I want more – I want us to score more goals.

â€œPeople will think Maiconâ€™s goal was the result of a fluke. Far from it. Thatâ€™s about the third time Iâ€™ve seen him score goals like that!â€