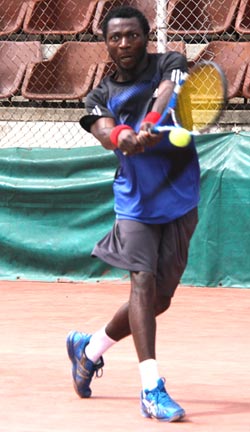 â€¢Sunday Emmanuel returns a serve to an opponent during the recently concluded CBN Open in Lagos, Nigeria. Photo: Akin Farinto.

Nigeriaâ€™s number one tennis player, Sunday Emmanuel says he is targeting to win a gold medal in the tennis event of the Commonwealth Games, which comes up in India from 4- 18 October, 2010.

Emmanuel, who won the 2010 edition of the Central Bank of Nigeria, CBN Senior Tennis Open Championship after he defeated Henry Atseye 7-6, 6-2 in an explosive final played at the National Stadium, Surulere, Lagos, Nigeria, disclosed that he could not make much impact at the 2008 edition of the Junior Commonwaelth Games, which was hosted by India, adding that he would prepare very well to ensure that he has a good outing at the New Delhi 2010 Commonwealth Games.

â€œMy target in this yearâ€™s Commonwealth Games is to win at least a gold medal. IfÂ  I could do that, Iâ€™ll be very happy and give God the glory. It will be a great experience in my tennis career,â€ he said.