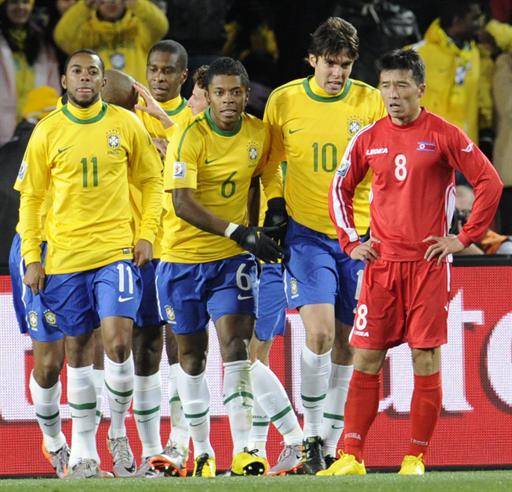 On day five of the 2010 World Cup, mighty Brazil had a scare as they could only manage a 2-1 win over North Korea while Portugal and the Ivory Coast battled to a 0-0 draw.

Finally New Zealand picked up their first ever World Cup point with a late equaliser against Slovenia. Final score there 1-1.

Brazil v North Korea:
Five-time champions dig deep to finally overcome North Korea 2-1World Cup contenders Brazil were held for 55 minutes to a 0-0 draw by plucky North Korea before defender Maicon finally broke the deadlock with a fierce drive into the back of the net from a tight angle. The Asian minnows defied the odds to go in 0-0 at half-time but finally relented with first Maicon’s goal and then the second from Elano with 18 minutes left. However an extraordinary goal from Ji yun-nam on 89 minutes set up a tense finale and the hardly expected final result of Brazlil 2 North Korea 1.

Many pundits expected the Brazilians to run riot against a North Korean team who were only making their second appearance in the finals. However they just came short of what would have been an amazing draw before finally going down bravely and with their reputation well and truly enhanced.

Portugal v Ivory Coast:
Drogba plays but cannot inspire Ivory Coast in 0-0 draw with PortugalIn a crucial opening match in the tough Group G, the Ivory Coast and Portugal scrapped out a 0-0 draw under pouring rain in Port Elizabeth. Cristiano Ronaldo hit the post for the Portuguese and the Ivory Coast pushed hard during the final minutes but neither team were able to make the breakthrough as they both settled for a point.Didier Drogba started on the bench for Sven Goran Eriksson’s side but did come on as a second half substitute although he only had one decent chance to score. Both teams should be happy with a point as they now turn their attentions to Brazil and North Korea who complete the pool.

The All Whites, who lost all three matches in their only other finals appearance in 1982, looked destined for defeat after Robert Vittek had headed Slovakia into a 50th-minute lead in the Group F match.But three minutes into injury time, Reid popped up at the back post to head Shane Smeltz’s cross in off the post to deny Slovakia victory in their first World Cup match as an independent nation.

It was no more than New Zealand deserved from a scrappy encounter in which Slovakia did little that will worry group rivals Italy or Paraguay, who also drew 1-1 when they met on Monday.