An ankle injury prevented him from completing the good job he started in his left back position during the World Cup Group B opening match between the Super Eagles and Argentina last Saturday.

But, Eagles defender, Taiye Taiwo, who limped off the pitch after pulling his ankle in the tension-soaked match says he will like to return in Nigeriaâ€™s match against Greece tomorrow.

Taiwo, a champion with French Club, Olympique Marseille last season, is undoubtedly enjoying his first senior World Cup for Nigeria and he does not feel like stopping.

â€œItâ€™s really electrifying playing at this big stage and I will like to play till the end of the competition. Itâ€™s sad that I suffered this injury during our match against Argentina, but thatâ€™s behind me now. Iâ€™m looking forward to playing in the match against Greece,â€ Taiwo told P.M.Sports during their outing yesterday. 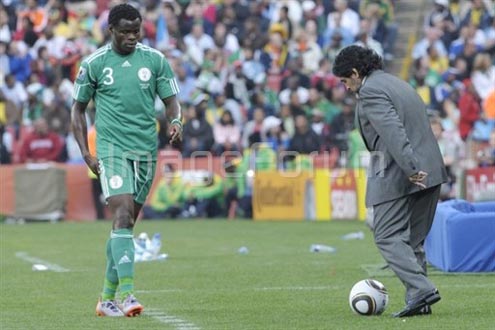 The defender is hoping that Swede Coach, Lars Lagerback, who was magnanimous enough to give the Eagles a training-free day yesterday, will still give him a chance tomorrow when the Nigerian squad tackle the Greeks at the Bloemfontein stadium.

Fortunately, Taiwoâ€™s pulled ankle is fast healing. He joined the rest of the squad during their last training and the leftie believes he would get a role to play in the next match.

Coach Lagerback said he would not like to miss Taiwo in the remaining matches, but he is not desperate to rush the player back to action.

â€œReally, it was a terrible blow that we lost Taiwo at that moment in our opening match with Argentina. I think the doctors are working on his injury problem and he needs to recover well before he can play. All the same, we need everyone in camp to move to the next round and Taiwo is crucial to that plan,â€ Lagerback said.