Anglican Bishop Chased Out Of Church 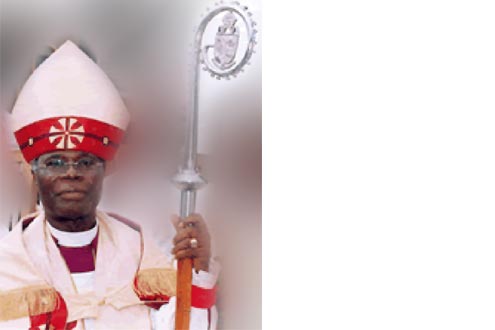 The Bishop of the Metropolitan See Of Anglican Communion, (Lagos West), Bishop Peter Adebiyi got what he did not bargain for from members of St. Paulâ€™s Anglican Church Mushin, Lagos, Nigeria, when he went there yesterday.

He was prevented from conducting church service and booed out of the church by the angry members of the church.

The bishop had gone to the church along with over 50 Vicars of Anglican Communion in Lagos West to conduct the Sunday service and possibly make peace between the bishop and church members.

But they were shocked that the members did not allow them to enter the church and when they were eventually allowing the church members disconnected the light and public address system and started singing negative songs instead of praises.

This continued for about five hours between 7 a.m â€“ 12 noon after which Bishop Adebiyiwas booed out of the church.

The bishop and the members of the church have been at loggerheads over the sack of their former Vicar, Rev. C.E Mgbeokwere. The members protested that the Vicar was wrongly removed and since then they disowned the bishop and nobody has replaced the sacked one. The crisis got to a stage that the bishop ordered the closure of the church. But the members broke the lock and reopened the church and started conducting service on their own.

Efforts to settle the rift have so far failed.

P.M.NEWS gathered that during one of the reconciliation meetings, the bishop used a foul language by referring to the church members as illiterates and this compounded the matter and the members backed out of the meeting. On what led to the disgrace of His eminence, P.M.NEWS gathered that the church had fixed 20 June, 2010 (yesterday) for their Fatherâ€™s Day celebration. But the bishop informed the church that he was coming on that day and conduct the service and possibly make peace with the members.

The members told him that he should change the date as they had slated that day for the celebration of Fatherâ€™s Day. The bishop refused and said that the church was under him.

When P.M.NEWS visited the church yesterday, the Bishop was already in the church with a Toyota bus with registration number LCH 547 SMK with about five other buses conveying the other priests that came along with him.

Reacting to the development, the church public relations officer, Tunji Oguntuase told P.M.NEWS that he was shocked at the behaviour of the church members.

He said that the bishop is the head of the Diocese and he can go to any church but the members were behaving as if they were on their own.