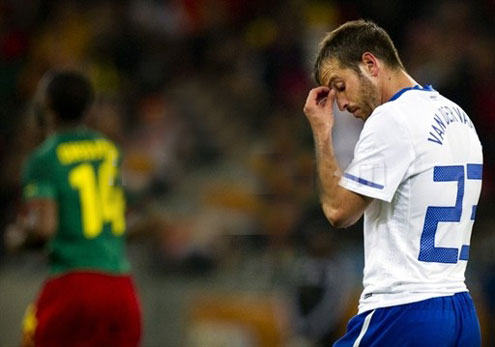 Rafael van der Vaart is disappointed that he was the reason for the 1-1 , because of an unintentional hands ball. The Netherlands won in the Greenpoint Stadium in Cape Town, the last group match against Cameroon, with 2-1.

Rafael van der Vaart has been quietly getting on with his job for the World Cup semi-finalists Holland.

Like Sneijder, Van der Vaart has known difficult times recently at club level. After both pitched up at Real Madrid, the Spanish giants decided they would offload their Dutch connection and Sneijder went off to lift the Champions League with Inter milan. Van der Vaart has stuck doggedly to his dream of making a name for himself at the Bernabeu.

â€œRafiâ€, 27, is a veteran in the orange of the national side with 81 caps. With Dirk Kuyt and Eljero Elia both providing some width, as well as Sneijder, the man nicknamed â€œVDVâ€ as well as the â€œDutch Beckhamâ€ is likely to play in a more withdrawn role against the South Americans as Nigel De Jong is suspended.