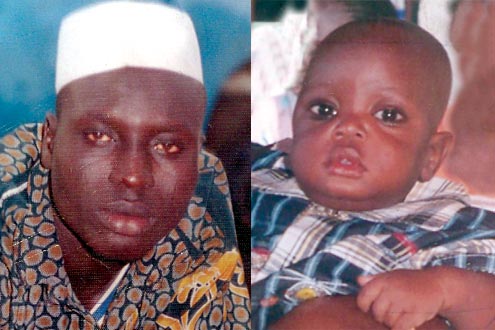 His wife, Silifat Ishola, was critically injured and has been admitted to an intensive care unit of a private hospital in the area.

His neighbours told our correspondent that the family was fast asleep when the fire broke out at about 11 p.m SaturdayÂ  and no one could ascertain the cause of the incident.

A neighbour of the late vulcaniser said: â€œNobody could say what caused the fire. Initially there was power outage and some of us came outside to sleep, but the family went inside and locked the door.

â€œThenÂ  power was restored andÂ  we went in to sleep. Suddenly, there was power outage again and we heard shouts of help from the deceasedâ€™s room.â€

The neighbour said they were able to rescue Mrs. Ishola and her baby firstÂ  but it took them a long time to get the husband out of the room.

ThoughÂ  they were rushed to a hospital, Isiaka and his son died yesterday as a result of the severe burns they sustained in the fire accident.

Both father and son were buried according to Islamic injunctions yesterday at a cemetery in Ojo Local Government Area of Lagos State.

P.M.NEWS made efforts to see the wife in the hospital but the authorities refused any access to her.

Meanwhile, a neighbour, Abdulahi Badru, said the deceased and his son might have survived the accident if they had quick access to first aid treatment.

According to Badru, â€œmost of the hospitals were not ready to give any first aid. They were demanding N100,000 deposit before they could attend to the victims. They were moved to about four hospitals before a private hospital finally admitted them. By then, it was too late.â€