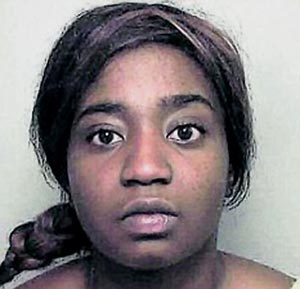 A student has been jailed for 18 months for falsely claiming a cleaner had raped her – so she could get an extension on her university course work.

According to the London Daily Mail, Temitope Adenugba, 24, was struggling to meet a deadline whilst studying at Oxford Brookes University last year.

She phoned police to tell them she had been abused as a child, before complaining she had also been subjected to a serious sexual assault as she slept in her university digs.

When officers attended her halls of residence to take a statement, Adenugba pointed at cleaner Kunle Ogunmola and said: â€˜Canâ€™t talk here, thatâ€™s the man who raped me.â€™

Mr Ogunmola was arrested, before a subsequent police investigation exposed a catalogue of lies and her claims later proved to be complete fantasy.

The lie was created in a bid to get an extension on her end-of-term coursework, the court heard.

Sentencing her to 18 months in prison at Oxford Crown Court on Friday, Recorder Rabinder Singh said: â€˜Itâ€™s extremely easy to make an allegation of rape when thereâ€™s no foundation whatsoever.

â€˜Itâ€™s likely to have the perverse impact of guilty men walking free.â€™

The court heard that police attended Clive Booth Halls of residence, Oxford, on May 21 last year after she reported historic abuse against her as a child.

Officers interviewed her but were stunned when she told them Mr Ogunmola had used a key to get into her room on April 13 and raped her.

A full police investigation was launched and the cleaner was quizzed and later arrested.

But police found any keys taken by Mr Ogunmola had been returned by April 12 and would not have given him access to her room at any time.

Adenugba had also alleged her victim had been harassing her with phone calls, but analysis of both partiesâ€™ mobile phones showed this to be a lie.

Scientific examination of her pyjamas also revealed no link to Mr Ogunmola.

Mr Walsh added that Adenugba had made a fictitious rape complaint against a previous partner in October 2006.

Walter Scott, mitigating, said his client had made the claim against Mr Ogunmola after an earlier false allegation of harassment against the same man â€˜didnâ€™t have the desired effect of extending her time to do her courseworkâ€™.

He added: â€˜She was not seeking to directly attack the victim, he was chosen rather arbitrarily.â€™

Det Ch Insp Colin Paine, of Thames Valley Police, said: â€˜It is exceptionally rare and unusual for a malicious complaint to be made in this way. It caused significant distress to the man who was accused.â€™